Morne Morkel’s 4 for 39 ensured South Africa successfully defended a total of 270 that was built upon Quinton de Kock’s solid hundred as India for the second time in three matches lost a game from a commanding position. With 20 overs to go at Rajkot, India needed just around a run-a-ball with both Virat Kohli and MS Dhoni having been at the crease for a decent amount of time. But, they just could not keep up with the run rate, and in spite of having wickets in hand, India fell well short of the target, by 18 runs.

After India had lost Rohit Sharma for a well-made 65, the South African pacers adopted a well-thought out tactic against Dhoni and Kohli, and it worked to the hilt. The pacers dug the ball in short, and with the ball not coming on to the bat nicely, the Indian duo failed to rotate the strike. There were numerous dot balls in the partnership, and eventually the pressure got to the Indians. The struggling partnership between Kohli and Dhoni was broken when the Indian skipper gave an easy catch, unable to control a short ball from Morkel.

Morkel was clearly the man who made life difficult for India. Before getting Dhoni out, he had frustrated him by bowling a number of balls at his body, and was rightly rewarded. Not long after, he got Kohli as well, again digging in a short ball. The batsman tried to slap the ball out of the ground, but only found the fielder on the boundary. Kohli departed for a struggling 77 from 99 balls, and Ajinkya Rahane who was demoted in the chase fell the very next ball in the same manner. Earlier in the innings, Morkel also got Shikhar Dhawan as the latter ran down the crease to him. 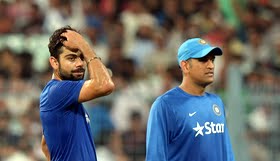 India were in a decent position at one point in the chase. After Dhawan fell early again, Rohit and Kohli, who was back at his number three position, took India past the 100 mark without much trouble. Rohit hit a couple of massive sixes as India seemed in control. However, for the second game in a row, he was out caught and bowled, unable to get to the pitch of the ball – the only difference being that this time the bowler was JP Duminy. Kagiso Rabada again kept things extremely tight, conceding under four runs though he did not claim a wicket.

Earlier in the day, South Africa’s innings was built around an elegant century by de Kock. The wicket-keeper batsman, who once scored three back to back hundreds against India, was at his best again against his favourite opponent. South Africa surprised by opening with David Miller, but his partnership with de Kock was worth 72, and it set a nice foundation for the team. De Kock and Faf du Plessis then featured in a big partnership which took the Proteas past 200. They lost their way slightly towards the end, but a crucial cameo from Farhaan Behardien helped them to 270, which was more than enough in the end.