India squad for next two Test matches against South Africa

India announced on Wednesday named an unchanged squad for the remaining two matches of the Test series against South Africa to be held from Nov 25th at Nagpur and Dec 3rd in Delhi.

India on Wednesday named an unchanged squad for the remaining two matches of the four-Test series against South Africa to be held from November 25th at Nagpur and December 3rd in Delhi. 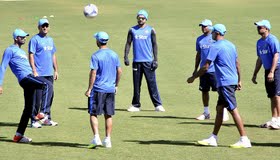 The third Test begins on November 25 in Nagpur while a final decision on the hosting of the fourth and final Test, to be held at FerozeShah Kotla, is yet to be taken, after the Delhi & District Cricket Association (DDCA) was not given clearance by the state government relating to tax issues. The confirmation on the venue is expected in the coming days. If Delhi fails to get the clearance, BCCI will shift the Test match to Pune.