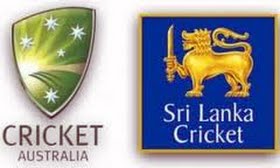 A shaky start to the tour by Australia let Sri Lanka go 1 up in the 1st t20 of the tour. It is Australia’s chance to turn around things as they have plenty of T20 talent. It will be interesting how Cameron White operates his bowlers this match compared to the last t20. Dilshan hit form last match with a century but the big question is can he keep hitting runs at this rate.

Sri Lanka won the first T20 match and defiantly were in control during play in the match against Australia who were clueless. What struck to be the biggest influence was TM Dilshan and not just scoring that hundred of his, the century helped Sri Lanka in the batting but the bowling decisions he made were just as good breaking down the Australian batsman. The only worrying sign in Sri Lanka’s game was their wasn’t too many big contributions other than TM Dilshan’s big score. The bowlers which tore apart the Aussie’s really made sure of the win and if Sri Lanka want to win games this tour they will have to continue.

Australia will have to play much better than what they did in the first t20 to have a chance not only in this match but the rest of the series. They were shocked by the conditions and how well Sri Lanka used them and it didn’t help when Cameron White focused on his pace bowlers when he had spin options available. Now that Australia have adjusted slightly better perhaps they can turn this series around. The batting wasn’t good at all and after lack of match practise you can understand but White and David Hussey looked out of sorts. A positive for Australia out of that match was that Warner is still his dangerous self in this format. The australian XI looks like it has a very long batting order but that match totally was the opposite. The bowling wasn’t good either with Lee picking up the early wicket but at the end of the innings they got blown away from the brilliance of Dilshan.

After performing so well last match it will be unlikely anything will change in Sri Lanka’s XI.

Australia on the other hand may be willing to give Aaron Finch and James Pattinson a run to see if they can cause any damage.