England have named pace bowler James Anderson in place of Jade Derbach in their 12-man squad for the third and final Test of the series against Sri Lanka starting at the Rose Bowl in Southampton on Thursday.

England have named pace bowler James Anderson in place of Jade Derbach in their 12-man squad for the third and final Test of the series against Sri Lanka starting at the Rose Bowl in Southampton on Thursday.

Anderson missed the drawn second Test with a side strain suffered during the first, which England won when the visitors collapsed on the final day to take a 1-0 lead. 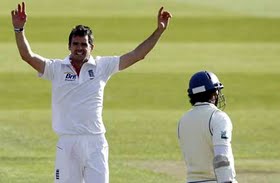 Uncapped Derbach was 12th man at Lord's and Anderson, provided he proves his fitness in a domestic Twenty20 match on Sunday, is likely to return to the starting XI in place of Steve Finn, England's leading wicket taker in the second Test.

"Jimmy Anderson is the leader of our bowling attack so clearly he will be a significant inclusion," national selector Geoff Miller said in a statement on Sunday.

"Side strains can be particularly troublesome for bowlers but given Jimmy's injury was a grade one strain and therefore a low grade injury, he is expected to be fit for selection.

"A period of rest and recovery has certainly been beneficial and we obviously wouldn't include Jimmy in the squad if the medical staff weren't confident of his fitness."

Miller told Sky Sports News: "We've been looking for strength in depth for a long time now and we're gradually getting it. I had a chat with Jade explained the situation and we think this is the best way forward.

"When it comes to Southampton we'll look at what the conditions are like and make the decision from there. It was pretty flat at Lord's and it's a matter of variations.

"We've got people who can bang it in at pace and Jimmy, who can pitch it up and swing it so we've got the variations.

"We would be classed as a number side in the world on all sorts of surfaces and it's a matter of that seam attack working out the best way forward and they will."