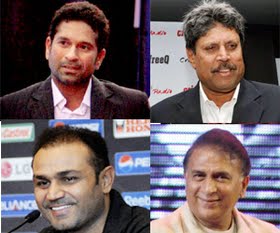 The other two -- Sunil Gavaskar and VirenderSehwag -- beat a host of legendary cricketers to be named in the two openers' slot. They beat competition from the likes of Geoffrey Boycott, Jack Hobbs, Len Hutton, Hanif Mohammad and Herbert Sutcliffe.

Four Australians, two West Indians and one Pakistani also made it to Peoples' Dream XI as more than a quarter of million people voted on ICC's official website as part of the build-up to the England-India Test match at Lord's to celebrate the 2000th cricket Test.

Kapil was chosen as the lone all-rounder ahead of the likes of Ian Botham, Richard Hadlee, Jacques Kallis, Imran Khan, Gary Sobers and Frank Worrell.

Australian Adam Gilchrist won the poll for wicket-keeper by beating the likes of Mark Boucher, Jeff Dujon and Rod Marsh while Shane Warne got the nod of online voters ahead of the likes of India's BishenBedi and Anil Kumble and Sri Lankan MuttiahMuralitharan.