None of the Indian batsmen could get going over a period of 5 matches except Kohli, Rohit Sharma

Buoyed by their World Cup triumph and ecstatic after shining during the Indian Premier League the young Indian guns landed on the shores of Caribbean with thoughts of conquering the once-feared territory. And though the targets - wining the one-off Twenty20 and clinching the ODI series

Buoyed by their World Cup triumph and ecstatic after shining during the Indian Premier League the young Indian guns landed on the shores of Caribbean with thoughts of conquering the once-feared territory. And though the targets - wining the one-off Twenty20 and clinching the ODI series - set by coach Duncan Fletcher and the team management have been achieved, the way the young side wilted under pressure also exposed that there are chinks in their armour. 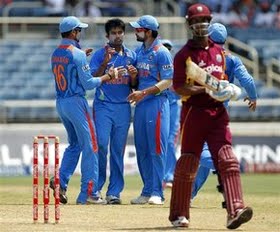 Barring Virat Kohli, the player who seems to have shredded his boyhood blunders in the blink of an eye, and Rohit Sharma - the man of the tournament - none of the other Indian batsmen could get going over a period of the five matches.

The likes of Subramaniam Badrinath, Suresh Raina and Yusuf Pathan all looked clueless when peppered with the old Indian nemesis, short-pitch bowling. The three of them, and openers Shikhar Dhawan and Parthiv Patel, were made to jump like a cat on a hot tin roof by the West Indies pacers.

Their technique and temperament, both, were found wanting when tested with the throat-cutting snotters by Kemar Roach and Andre Russel in the last two ODIs. They looked so intimidated by the opposition seamers that part-timers like Kieron Pollard and Lendl Simmons were able to take advantage of them.

Badrinath, making his umpteenth comeback to the Indian side after plundering tons of runs in every possible competition back home, seemed under tremendous pressure to perform. The wall of the Tamil Nadu and the Chennai Super Kings batting could only muster 40 runs in his four outings, much lower than the standards he has set for himself at the domestic level.

Raina, too, looked clearly perturbed by the responsibility of leading the side. The southpaw could not transform the confidence he generally brings to his batting through his electric display on the field. His 82 runs in five innings was not the sort of performance the side needed from its skipper. It's still baffling that Raina, who generally gets going with singles and doubles before launching his array of big strokes, tried to take the opposition on from the beginning of his innings.

It has often been discussed the Yusuf Pathan brings a stability to the side with his all-round ability. But scoring 42 runs and bowling just 22 overs throughout the course clearly states that the big block from Baroda is way overrated. He can clobber a ball on a given day but also capable of delivering a string of low scores on days that would follow.

Dhawan, like Badrinath, was unable to shred his fringe-player status as the Delhi lad failed to use another glorious opportunity provided to him. You don't expect your opener to hit just one fifty and score runs at an average of 17.25 in a long series.

Parthiv Patel's stint behind the wickets can be nothing more than ordinary as he fumbled on too many occasions and showing only the glimpses of his capability with the bat.

Also, with Dhawan and Patel opening for India, the more serious question is that in the absence of Virender Sehwag, Sachin Tendulkar and Gautam Gambhir are these two the best openers we have in India at the moment.

It is also unfathomable that why West Indies didn't prepare Kingston-like pitches in the first three ODIs, especially after considering the problems it generates for the Indian batsmen.

It would not only have created doubts in the minds of Indian batsmen but could also have made their bowlers to alter their line and length altogether.

The two sides will once again lock horns on Sabina Park wicket in the first Test from Monday. And though the Caribbean outfit will face a stern test against a different-looking Indian side comprising senior pros like Rahul Dravid, VVS Laxman and MS Dhoni, the momentum and form they seem to have rediscovered could well pay dividends in the longer format of the game.

Not to forget that when peppered with short-pitch stuff even the best of Indian batsmen can buckle under pressure.