Warwickshire Bears preserved their slim chance of qualifying for the Clydesdale Bank 40 2011 semi-finals with a 51-run victory over Hampshire under the Edgbaston lights. 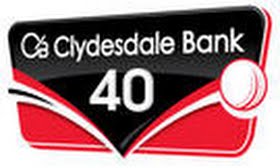 Warwickshire Bears preserved their slim chance of qualifying for the Clydesdale Bank 40 semi-finals with a 51-run victory over Hampshire under the Edgbaston lights.

Boosted by half-centuries from Neil Carter, Jim Troughton and Rikki Clarke, the Bears totalled a meaty 273 for 8 against a Royals side already out of contention after five defeats in eight games. James Vince underpinned the reply with a defiant 82 off 95 balls, but after he fell the Royals' chase fizzled out quickly as they tumbled from 147 for 2 to 222 all out.

Warwickshire chose to bat against a Hampshire attack which lost David Griffiths in the warm-up when he suffered an ankle injury. Second-wicket pair Carter and Will Porterfield added 67 in 53 balls. Carter has endured a tough time since returning from a pelvic injury but showed his old verve in making 53 off only 36 balls, with nine fours, and one six, before falling lbw to Danny Briggs.

Porterfield opened his account with two thumping boundaries but lost momentum before lifting former Bears spinner ImranTahir to Vince at long-off to fall for 41. Vince then pulled off a brilliant one-handed catch at extra-cover to oust Tim Ambrose but Troughton and Clarke kept the ball rolling with a stand of 60 in 53 balls.

Troughton posted a polished half-century before lifting Tahir to Ben Howell at deep mid-wicket to perish for 61 while Clarke passed 50 for the second time in successive CB40 games in three days, holing out in the final over for 63.

When Hampshire replied, Jimmy Adams soon lifted Chris Woakes to Varun Chopra at cover before the visitors were assisted by a recurrence of Carter's injury problems. After delivering two no-ball full tosses in his fourth over, the left-armer limped out of the attack.

Vince and Sean Ervine put on 116 in 19 overs but Ervine, having struck 47 off 52 balls, fell lbw to Kiwi spinner Jeetan Patel. Left-armer Ant Botha put the main brake on the scoring and he collected a deserved wicket when Michael Carberry slogged to deep mid-wicket.

After Patel removed Vince and Liam Dawson in the space of four balls, Hampshire's pursuit went into freefall in front of a near-6,000 crowd who had taken advantage of free admission.