Ian Bell's second hundred in three matches helped England stay on top in the third and final Test against Sri Lanka at the Rose Bowl here on Sunday.

Ian Bell's second hundred in three matches helped England stay on top in the third and final Test against Sri Lanka at the Rose Bowl here on Sunday. 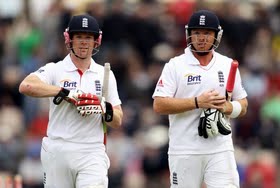 Sri Lanka were 112 for three in their second innings at stumps on the fourth day -- still 81 runs behind England's first innings 377 for eight declared.

England, pressing for a win that would give them the series 2-0, saw their pacemen back up Bell's 119 not out with a disciplined display.

And shortly before the close Stuart Broad, bowling a much fuller length after wastefully dropping short for much of this match, had the experienced Mahela Jayawardene caught behind for just three off an excellent leg-cutter.

Sri Lanka captain Kumar Sangakkara -- the other proven class batsman in the tourists' ranks -- was 44 not out at the close.

Nightwatchman Rangana Herath was unbeaten on two after a day where the rain, which has taken 155 overs out of this match, stayed away.

Bell's innings enabled England captain Andrew Strauss to make an enterprising declaration with his side 193 in front -- nine more runs than the tourists managed in their first innings 184.

Sangakkara, leading Sri Lanka in place of the injured Tillakaratne Dilshan, came to the crease having scored a mere 65 runs in five innings this series at an average of 13, as compared to a career Test mark of more than 56.

But Sangakkara, Dilshan's immediate predecessor as captain, showed his class with a magnificent cover-driven four off Broad.

Test debutant Lahiru Thirimanne who, like fellow left-hander Sangakkara, made a hundred in last week's tour match against Essex was defending gamely.

But fast bowler Chris Tremlett, who took a Test-best six for 48 in the first innings, dismissed Thirimanne for 38 when the opener edged a fine delivery that seamed away to Strauss at first slip.

Bell's century -- the first Test hundred at the Rose Bowl -- followed his unbeaten 103 in England's innings and 14-run first Test victory in Cardiff.

Together with Eoin Morgan, who made a breezy 71, he shared a sixth-wicket stand of 137 against a flagging Sri Lanka attack badly missing retired greats Muttiah Muralitharan, Chaminda Vaas and Lasith Malinga.

England resumed Sunday on 195 for four after Kevin Pietersen's fluent 85 on Saturday had revived the innings from the depths of 14 for two.

Bell was 39 not out overnight and nightwatchman Anderson unbeaten on nought.

Anderson struck two successive cover-driven fours off Chanaka Welegedara but, next ball, he was caught behind off the left-armer for a sparkling 27.

And he went to his 14th Test hundred, in 159 balls with 12 fours, when he hooked a bouncer from Suranga Lakmal.

Morgan got himself out when, trying to carve Lakmal, he edged behind to give wicketkeeper Prasanna Jayawardene his fourth catch of the innings.

England then lost a flurry of wickets chasing quick runs, with Matt Prior, who made a century in the drawn second Test at Lord's, out for nought.

Victory in this match for England would see them go joint second alongside South Africa in the ICC Test rankings with only India, their next opponents, above them.