England were in trouble, finishing day four on 2 for 46, chasing a tough 284 on a pitch that is getting harder to bat on, particularly against the spinners

England were in trouble, finishing day four on 2 for 46, chasing a tough 284 on a pitch that is getting harder to bat on, particularly against the spinners. Pakistan’s second-innings total was built around a well-crafted 151 by Mohammad Hafeez, which took them to a respectable 355. Shoaib Malik then celebrated his farewell Test with two big scalps as Pakistan gained control of the final Test. Moeen Ali failed again, and was trapped lbw by Ali. Even a review could not save him. Malik then breached Ian Bell’s defence before he had opened his account.

The start was much brighter for England against the pacers. Ali was hit on the helmet by Wahab Riaz, but looked in decent touch as he eased a couple of boundaries. England scored at nearly six in their first four overs. But, things changed as the spinners were introduced. Zulfiqar Babar beat Alastair Cook with his very second delivery, and almost had his off-stump pegged back. England were never in control once the spinners were introduced. Their biggest hope of saving the match now is if Cook and Joe Root bat out for a majority of the first two sessions. 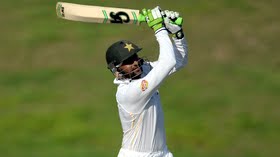 Pakistan should be thankful to Hafeez for putting them in a strong position. Resuming at 97, he batted with composure to kept Pakistan ahead in the game. He had two close shaves in the first over, but once he got his eye in, he settled down nicely to reach his ninth half-century. England also have to take a share of the blame for finding themselves in such a big hole. Hafeez offered another chance when on 109, as a leading edge was given back to Stuart Broad, but the bowler failed to hold on to the same in the follow through.

It wasn’t easy going for Pakistan as well. Nightwatchman Rahat Ali was sent back by James Anderson in the second over of the day. But, the most crucial phase of the day came as skipper Misbah-ul-Haq and Hafeez added a precious 93 for the fifth wicket. Under the circumstances, and keeping the pitch in mind, it was worth a 200-run stand. Misbah hung on gamely and made a crucial 38, but would be disappointed at not having made it bigger. Broad set him up perfectly for an lbw, by bowling a couple of short ones, and then slipping in the fuller-length delivery.

England eventually got the better of Hafeez as well, but not before he had put his team in a decent position. But, Pakistan weren’t done yet. Asad Shafiq and Sarfraz Ahmed chipped in with 46 and 36 respectively, and towards the end, Riaz also made a breezy 21. All these runs added on to the frustration for England. They had their chances, but failed to grab most of them. With two wickets down, and Ben Stokes unlikely to make much of a contribution even if he steps out to bat, England find themselves in a spin.