I don't need any respect from Board: Kapil Dev

Cricket legend Kapil Dev said Sunday that it was entirely up to the cricketers to decide whether they want to play for their country or their club.

Cricket legend Kapil Dev said Sunday that it was entirely up to the cricketers to decide whether they want to play for their country or their club.

Dev was replying to a query on if the current cricketers preferred club over country.

'Things change as time goes by. I feel everybody has the right to choose what ever they like. I loved to play for my country. Things have changed, life has changed. You cannot control anybody's life. Whatever anybody wants to do he should be allowed to do,' said India's first World Cup winning captain on the sidelines of a mobile phone launch here. 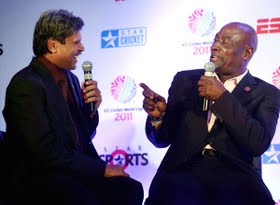 Top Indian stars like Sachin Tendulkar, Gautam Gambhir, Yuvraj Singh and Virender Sehwag will be missing the West Indies tour due to injury or fatigue which had stoked a belief that the cricketers have started to prefer playing in the cash rich IPL over playing for the national team.

When asked to compare his 1983 World Cup winning team with that of the current world champs lead by M.S. Dhoni, Dev said: 'I feel proud. Like a big brother or parents I am very proud of the current team. This team is far better than ours was. It has world class players in every department.'

Asked to react to the Board of Control for Cricket in India (BCCI) inviting him to a function to felicitate the 2011 World Cup winners, a visibly miffed Kapil who has had an on and off relationship with the BCCI replied: 'People like (Ravi) Shastri, (Sunil) Gavaskar they are doing their jobs so am I. Since they are visible on TV and I am not doesn't mean anything. I don't have to say anything on that. It's good that they have invited me. They have called many players and I am also among them. Happy that they have called me and even if they hadn't I would be happy because the boys have won the World Cup.'

'I don't need any respect from the Board. God has given me lot. On I being not invited earlier is no big deal. They haven't invited (Venkat) Raghavan, (Bishan) Bedi etc,' added Dev.