Indian batsman Suresh Raina has been fined 25 percent of his match fee for showing dissent following his dismissal on the opening day of the first Test against the West Indies in Barbados. 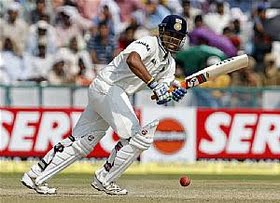 Indian batsman Suresh Rainahas been fined 25 percent of his match fee for showing dissent following his dismissal on the opening day of the first Test against the West Indies in Barbados.

Raina was given out caught off the bowling of leg-spinner Devendra Bishoo and responded by shaking his head, looking skywards and then swinging his bat at the ground.

Raina pleaded guilty when charged by match referee Chris Broad of breaching clause 2.1.3 of the ICC Code of Conduct which relates to 'showing dissent at an umpire's decision by action or verbal abuse'.

"What Suresh did was a clear breach of the code, something the player himself has accepted," Broad explained.

"There is a fine line between showing disappointment at a dismissal and demonstrating dissent but on this occasion Suresh was well over that line and his behaviour was unacceptable."

Raina scored 53 and India went on to be bowled out for 201 before reducing the West Indies to 30 for three at stumps.