After the Pakistani batsmen levelled the Test series against West Indies, at Saint Kitts, with a huge margin of 196 runs, the Caribbean skipper, Darren Sammy, expressed that he was not very disappointed with the defeat.

After the Pakistani batsmen levelled the Test series against West Indies, at Saint Kitts, with a huge margin of 196 runs, the Caribbean skipper, Darren Sammy, expressed that he was not very disappointed with the defeat.

He said that St Kitts’s defeat cannot compare with Guyana’s win. In the first Test, at Guyana, Pakistan lost by 40 runs.

The West Indian skipper, Sammy, was the key man for his side, contributing 5 wickets in his team’s victory in the first Test.

After a gruelling defeat in 2nd and last Test match, Sammy was happy over his team’s overall performance against Pakistan.

While talking to media the Windies captain stated, "We did a great job getting the win in Guyana and we were looking for similar 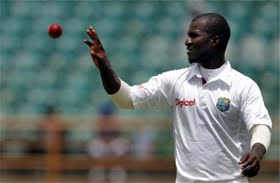 success here in St Kitts, but things did not go our way."

Sammy, speaking about the second Test, complimented the Pakistani batsman for the comeback and the performance.

"Pakistan played some good cricket and you have to give them credit. Our bowlers did all that was asked of them all throughout the series. They bowled with heart and that is what we asked. This is one of the positives we could take out of the series."

Earlier, the Men in Green won the One Day International series by 3-2. However, they lost the only Twenty20 match Pakistan by 7 wickets.

Saeed Ajmal, who took 17 wickets in the Test series, was titled as the “Man of the Series”.

After Pakistan, team India will visit West Indies for a five-match ODI series, one T20 International and a three-match Test series, starting in June.

Sammy commented that his side will look to continue with the hard work that they showed against Pakistan.

He said, "We are a confident group of young men and we will go into that series with the belief that we can win."