Sri Lanka slumped to 81-4 against England by the end of a rain-affected day one of the third Test on Thursday, leaving the tourists' hopes of a series-equaling victory at the Rose Bowl in tatters.

Sri Lanka slumped to 81-4 against England by the end of a rain-affected day one of the third Test on Thursday, leaving the tourists' hopes of a series-equaling victory at the Rose Bowl in tatters. 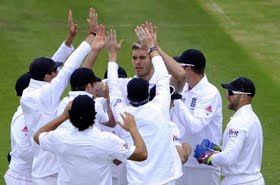 James Anderson and Chris Tremlett did the damage for England, the pacemen taking two wickets each on a frustrating day for both teams in Southampton, where only 38 overs were possible because of rain.

Thilan Samaraweera (24) and Prasanna Jayawardene (10) were leading the recovery for the Sri Lankans with a fifth-wicket partnership of 42 but the scoreboard makes miserable reading for a team that needs a victory to level the three-match series at 1-1.

Tremlett boasted the best figures for England of 2-17 while Anderson, back in the side after injury, finished with 2-24.

After the opening 75 minutes were lost to rain, England captain Andrew Strauss won the toss and saw Anderson, who missed the drawn second Test at Lord's with a side strain, rip into a Sri Lanka top order that struggled to adapt to the wet and blustery conditions.

A devastating opening spell either side of lunch accounted for debutant opener Lahiru Thirimanne (10) and interim captain Kumar Sangakkara (2), with Anderson at one stage having figures of 2-12 off nine overs.

Thirimanne edged to Strauss at first slip to become the sole victim in a truncated morning session lasting just 63 minutes before Sangakkara, back leading the team in the absence of the injured Tillakaratne Dilshan, went rather injudiciously after a wide delivery and feathered a catch to wicketkeeper Matt Prior.

In between, Tremlett trapped opener Tharanga Paranavitana lbw for 11 with an inswinger that struck the batsman's back leg directly in front of the stumps.

A heavy downpour forced the players to scuttle back to the pavilion to take an early tea that ended up lasting more than two hours, before Tremlett returned with vengeance at the start of the final session.

Among a series of vicious deliveries was one that lifted steeply on the pitch and induced an edge from Mahela Jayawardene (4) that was snapped up by Prior, ending a tortuous 25-ball knock.

As the early evening sun started to peek through the clouds, Samaraweera and Prasanna Jayawardene began to find things slightly easier.

Samaraweera looked particularly at ease, a couple of good-looking offside drives for four lifting the boundary count for the day to six.

With the tail in sight for England, the pair will need to build on their partnership on day two if Sri Lanka is to have a realistic hope of winning the Test.