Australia trounced India by 66 runs in the first ODI at Sydney on Friday. Batting first after winning the toss, the Aussies posted a mammoth 374 for 6 on the board courtesy tons from skipper Aaron Finch and Steve Smith, and a scintillating cameo of 45 from 19 from Glenn Maxwell.

While the Indian bowlers struggled for rhythm, Aussie leg-spinner Adam Zampa came up with an excellent display to finish with 4 for 54 as India were held to 308 for 8. 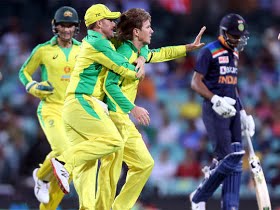 Speaking after the game, Indian skipper Virat Kohli stated that the lack of a sixth bowling option hurt them. “We'll have to find out ways of getting a few overs from a few part-timers in the side. Unfortunately, Hardik is not ready to bowl yet so we have to accept that and work around it. That is an area we have looked at, which is a very big part of any team balance. Stoinis and Glenn (Maxwell) do it for Australia. The key to keeping the batsmen in check is picking up wickets and we couldn't do that,” he explained.

On whether the Indian team was rusty, the skipper said that couldn’t be an excuse as they had enough time to prepare. “I don't think there's any excuses on the field when you don't pull up as a side. Probably the first long game we've played in a while, we've been playing T20 cricket. But having said that, we've all played a lot of ODI cricket. The body language after 25-26 overs was disappointing,” he added.

On the other hand, Aussie skipper Finch stated that, he found things tough at the start, but took his chances and things clicked. “I found it reasonably hard to get my timing in the middle overs. Took a couple of chances and luckily they came off,” he said.

India will now have to win the next two matches to clinch the three-match ODI series.