Bangladesh were always going to be favourites in the knockout clash against Oman on Sunday. But, having shocked Ireland in a previous qualifying encounter, Oman would have had faint hopes of pulling off another upset

Bangladesh were always going to be favourites in the knockout clash against Oman on Sunday. But, having shocked Ireland in a previous qualifying encounter, Oman would have had faint hopes of pulling off another upset. However, Bangladesh proved that they were too strong on the day. Their experienced players literally bossed over the clueless Oman bowling side. Opener Tamim Iqbal batted brilliantly, and his scintillating hundred, the first for Bangladesh in T20s, singlehandedly took the team to an imposing total. With the ball, another experienced campaigner came to the fore -- Shakib Al Hasan finished with brilliant figures of 4 for 15. 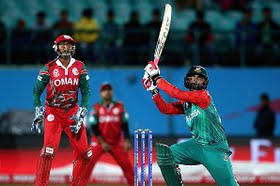 The fact that Iqbal scored 103 out of a total of 180 is an indication of how superb he was on the day. He dominated the innings from start to end, and did not allow any of the bowlers to settle into any sort of rhythm. His numbers also speak for themselves -- 63 balls for his knock, which featured 10 fours and half that numbers of sixes. Once again Sabbir Rahman proved what a significant player he is at number three. His whirlwind 44 from 26 balls was exactly what the team needed after Soumya Sarkar had struggled at the top, crawling to 12 from 22. Shakib too played a nice cameo of 17 from 9.
Oman's inexperience in the bowling, and their lack of exposure at the international level was also exposed. Bilal Khan was the only one who stood out, conceding only 16 runs in his four overs. Khawar Ali and Amir Ali were decent, conceding in the region of 7-8 runs per over. But, Munis Ansari was completely torn apart, being taken for 50 in his four overs. Ajay Lalcheta also had a terrible day, conceding 35 runs in his 3 overs. The part-timers were also given a pasting. Oman erred in line and length, and they were appropriately punished by Iqbal and Sabbir.
The Oman innings was interrupted by rain, but the simple fact was that Bangladesh were too good for them overall. Jitender Singh's 25 from 20 was the only score of note if one may say so. The rest came and went like a procession. Zeeshan Maqsood and Khawar were back in the hut before the fourth over. Adnan Ilyas and Aamir Kaleem also could not make any contribution. Bangladesh's bowling was of the top order, with Taskin Ahmed and Al-Amin Hossain sending back the openers, before Shakib came in to break the back of the batting. Mashrafe Mortaza and Sabbir also chipped in with a wicket each, as Bangladesh exercised their superiority.
-- By A Cricket Analyst