West Indies got the better of India in rather comprehensive fashion in the first ODI at Chennai. Chasing a challenging 288 to win, Shai Hope and Shimron Hetmyer

West Indies got the better of India in rather comprehensive fashion in the first ODI at Chennai. Chasing a challenging 288 to win, Shai Hope and Shimron Hetmyer hit contrasting hundreds as the visitors won the game by eight wickets, with 2.1 overs to spare.

While Hope made a dogged unbeaten 102 from 151 balls, Hetmyer blazed his way to 139 from 106 balls, with 11 fours and seven sixes. Thanks to their 218-run stand for the second wicket, West Indies were never under any pressure in the chase despite losing Sunil Ambris early.

Earlier, Shreyas Iyer (70), Rishabh Pant (71) and Kedar Jadhav (40) lifted India to 287 after the hosts lost Lokesh Rahul (6) and Virat Kohli (4) early. Rohit Sharma also fell to his favorite pull shot after scoring 36. A 114-run partnership between Iyer and Pant then rescued India. The innings was hugely significant for Pant, as he was under pressure having failed to perform in the last few series’. 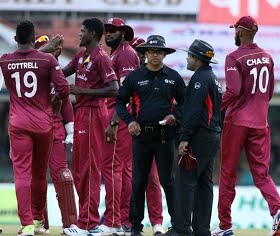 Even as India lost the Chennai ODI, the controversial run-out of Ravindra Jadeja in the match divided opinion. Jadeja was given not out over a close run-out appeal by West Indies fielders. However, after the replay was played out on the big screen, and it was found out that Jadeja was short of the crease, the umpire referred the decision to the third umpire.

Speaking about the same at the post-match presentation, Indian captain Kohli felt that has happened on the field was not right. "Oh it's simple, the fielder asks 'how is that?' and the umpire says 'not out'. People sitting outside can't dictate what happens on the field. I think that's what happened, Umpires and referees need to sit and see that,” the skipper said, expressing strong views.

Kohli, meanwhile, was pleased with the performance of Iyer and Pant. "I think myself and Rohit not clicking today gave an opportunity for two youngsters to claim a spot. They played very smartly on a slow pitch," he further stated.

The 2nd ODI will be played in Visakhapatnam on Wednesday, December 18.