India has named a 15-man squad to tour Sri Lanka this month end for a 5-ODI Series. The squad sees the return of Virender Sehwag and Zaheer Khan, who had missed the Asia Cup due to injuries.

India has named a 15-man squad to tour Sri Lanka this month end for a 5-ODI Series. The squad sees the return of Virender Sehwag and Zaheer Khan, who had missed the Asia Cup due to injuries. Sachin Tendulkar, who got his 100th International century during the Asia Cup, has been omitted by the Selectors. It could be a request from Tendulkar himself to rest him for the ODI Series. 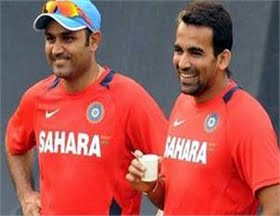 In the bowling department, Ashok Dinda, Rahul Sharma and Vinay Kumar have been retained while Pragyan Ojha makes a comeback. Ojha last played an ODI two years ago in Sri Lanka. There is no place for Harbhajan Singh with the Selectors deciding to stick with R Ashwin. Also keeping his place in the side is Bengal’s Manoj Tiwary.

Another notable selection is that of Ajinkya Rahane which could be based on his excellent performance in IPL 5. The ODI Series in Sri Lanka will begin on the 21st of this month.

Axed from the squad are Praveen Kumar, Ravindra Jadeja, Irfan Pathan and Yusuf Pathan, who were all part of the Indian team for the Asia Cup.