Champions Trophy, the 50-over tournament, will be held in England this year in June. Sehwag, who was dropped from both ODI and Test teams recently, has failed now to make the cut in India probables list 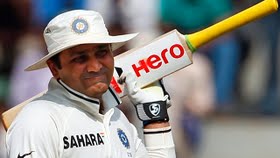 India have included Shikhar Dhawan and R Vinay Kumar in the 15-man squad for next month's ICC Champions Trophy, while, seniors like Gautam Gambhir and Yuvraj Singh were ignored for the tournament's last edition.

Right-handed Tamil Nadu opener Murali Vijay, who scored two hundreds against Australia in the Test series, too has been named in the MS Dhoni-led squad.

The national selectors, headed by Sandeep Patil, met on Saturday at the CCI, Mumbai to decide on the 15-man squad, which suggested that IPL form has been taken into account while finalizing the final 15.