Wicket-keeper batsman Sanju Samson has been named as replacement for injured Shikhar Dhawan in the T20I squad that will take on West Indies in a three-match series. Dhawan ended up getting a deep cut on his left knee during a Syed Mushtaq Ali Trophy match against Maharashtra, BCCI informed. After assessing the left-hander’s condition, BCCI’s medical team concluded that Dhawan would not be fit for the T20Is, as the injury would take time to heal.

Samson was initially dropped for the T20Is against West Indies. He was actually called up to the Indian team for the T20Is versus Bangladesh after some impressive performances in the Hazare Trophy, where he also hammered a double century. However, he did not feature in a single match, and was dumped subsequently. 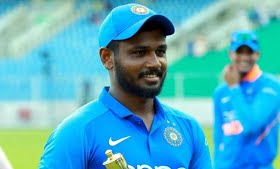 The unfair axing of Samson led to a lot of backlash, with former India off-spinner Harbhajan Singh even requesting new BCCI President Sourav Ganguly to change the selection committee stating that strong people are needed as selectors. 25-year-old Samson has only featured in one match for India -- a T20I against Zimbabwe at Harare in which he scored 19.

While Dhawan has been declared unfit for the T20Is starting December 6, he remains part of the ODI series which begins on December 15. Under pressure, Dhawan did not have a great T20I series against Bangladesh, with scores of 41, 31 and 19.

In the absence of Dhawan, KL Rahul is likely to partner Rohit Sharma at the top of the order in the T20Is against West Indies.

Meanwhile, India’s Test wicket-keeper Wriddhiman Saha will undergo a surgery after having sustained a fracture on his right ring finger during the Day-Night Test against Bangladesh at Kolkata.

"The BCCI Medical Team consulted a hand and wrist specialist and it was suggested that Saha undergoes a surgical fixation of the fracture. Subsequently, he underwent a successful surgery in Mumbai on Tuesday," a BCCI release detailed.