Clarke, Ashwin shine on a day of fluctuating fortunes

Australia finished the opening day’s play of the First Test at Chennai at 316 for 7. Skipper Michael Clarke wrapped up the day’s proceedings with a 23rd Test century and will resume his fight to stretch the Australian total as much as possible on Day 2.

Australia finished the opening day’s play of the First Test at Chennai at 316 for 7. Skipper Michael Clarke wrapped up the day’s proceedings with a 23rd Test century and will resume his fight to stretch the Australian total as much as possible on Day 2. R Ashwin picked up six out of the seven Australian wickets to fall. The match was slipping away from India with Clarke and debutant Moises Henriques solid in their 6th wicket stand.

It was R Ashwin who broke the sixth wicket partnership worth 152 runs when he had Moises Henriques failing to connect a slog sweep and trapped him lbw on the back thigh infront of off. Henqriques until then showed great patience to score 68 from 132 balls (with 5 fours) to rescue Australia from 153 for 5 to 304 for 6! India got one more wicket before close when Ravindra Jadeja skidded one through the gate of Mitchell Starc to clean up the tall left hander. The hosts bowled as many as 95 overs with only 22 of them coming through from the two pacers. R Ashwin was a one-man army taking 6 for 88 in 30 overs while all the other bowlers struggled to even beat the batsmen on a consistent basis. 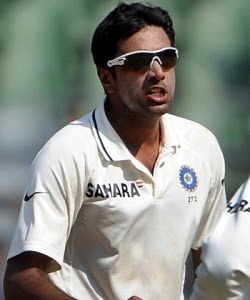 Update at Tea: R Ashwin was on a roll taking three quick wickets after the lunch break but a lack of support from the other bowlers allowed Australia to recover nicely to 215 for 5 in 66 overs by Tea. The Tamil Nadu offie who has taken all the five Australian wickets to fall so far was unlucky not to get his sixth one as Michael Clarke was lucky to get away with a bat pad inside edge minutes before the Tea Break. The Australian Captain is batting on 45 (from 85 balls with 5 fours) alongside debutant Moises Henriques (29*) to rescue his team.

Ashwin struck gold with just the fourth ball after the lunch break when Shane Watson (28 from 60 balls) went back instead of coming forward and got hit on the pad plumb infront of middle by a skiddy low bouncing off break. Watson had added 54 runs with Warner for the 3rd wicket. Ashwin in a similar fashion got the well set David Warner (59 from 93 balls with 6 fours) who too went back instead of coming forward to a flatter delivery which skidded through to hit his pad infront of leg and middle. Ashwin continued to be on a roll as he claimed his third wicket of the session in quick time when Matthew Wade playing well outside the line in a forward defence, got hit on the pad in line of middle to leave the Aussies at 153 for 5 in 47 overs.

Update at Lunch: Australia had the better of India in a busy morning session of the opening day’s play. The visitors put up a healthy 126 runs on the board in 34 overs but lost a couple of wickets to the off breaks of R Ashwin. Opener David Warner has held the Aussie innings nicely with an unbeaten 58 (from 88 balls with 6 fours) and with Shane Watson (28* from 56 balls) ensured that India couldn’t make further inroads before lunch.

After a bright start, Australia lost their first wicket when an ambitious Ed Cowan (29 from 45 balls with 4 fours and a six) left his crease for a big shot but only to be comprehensively beaten by a turning and bouncing off break from Ashwin to have him stumped out. Cowan with Warner gave a good start of 64 runs on the board in just 14.3 overs for the first wicket. Four over later, Ashwin got Phil Hughes dragging a square cut onto the stumps with a bottom edge to make it 72 for 2 before the pair of Warner and Watson consolidated nicely.

Warner was earlier dropped on 18 in Ashwin’s first over when the left hander got a thick edge to his cut shot which flew straight in and straight out of Sehwag’s hands at slip.

Toss and Teams: Australia have won the toss and elected to bat first on a surface that looks very dry and prepared just to suit the spinners. The visitors have gone in with three quicks and a lone spinner in Nathan Lyon. All-rounder Moises Henriques is going to make his debut. For India, Pragyan Ojha misses out to accommodate Harbhajan Singh who will be playing his 100th Test. Bhuvneshwar Kumar makes his Test Debut and will be sharing the new ball with Ishant Sharma. Sehwag’s opening partner will be Murali Vijay.