Toss: West Indies won the toss and elected to field.

West Indies are in a must-win scenario as they look to save the series. Bangladesh are just one win away from taking an unassailable 3-0 lead. 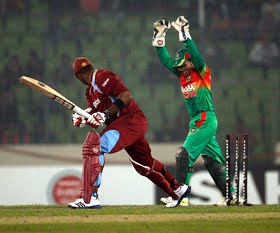 1. Marlon Samuels 126 is his highest score and fourth century in ODIs. It is also his third century in the subcontinent.

3. The number of fours hit by Samuels (17) is the third-highest in an innings against Bangladesh. The record (19 fours) is held jointly by Herschelle Gibbs and Andrew Strauss.

5. The 111-run stand between Kieran Powell and Samuels is the joint highest second-wicket stand for West Indies against Bangladesh.