Time for the real India to stand up

The trashing they received at the hands of Australia is history now, and the only way India can progress to the semi-finals from hereon is if they beat both Pakistan and South Africa.

The trashing they received at the hands of Australia is history now, and the only way India can progress to the semi-finals from hereon is if they beat both Pakistan and South Africa. In a way, the equation is pretty straightforward for them. There will be no involvement of the net run-rate factor following the drubbing they got against Australia. It’s either here or there for India; there is no middle ground. And while what India need to achieve to progress is rather simple to understand, it has been the thinking of the side that has bordered on the ambiguous, hurting them. 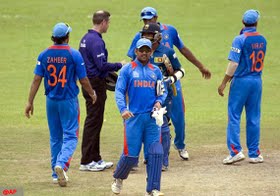 Against Pakistan, all experiments must be shunned, and M S Dhoni must take his best side on to the field. If that means bringing back Virender Sehwag, so be it. The Indian opener may be out of form, but his presence still gives India a better chance of winning than when he is sitting in the dugout. Sehwag might end up failing against Pakistan as well, but just in case it is his day, the Dehli dasher could put India in an impregnable position. It is a risk India must take at this stage of the tournament. Form or no form, Sehwag at the top of the order is anytime more dangerous than Irfan Pathan, who himself is an excellent hitter lower down the order.

It’s not that India don’t have the players to beat Pakistan. At the moment, they just don’t seem to possess the confidence to perform to their ability. Against a highly-talented and confident Pakistan side, however, they cannot falter else their World T20 dreams will be shattered. If they are looking for positives, the fact is that they haven’t lost to Pakistan in any World Cup game as yet, 50 overs or T20. Past record alone cannot see them through though.

Among the players India would be looking forward to, Gautam Gambhir and Virat Kohli would be key. Both men are known to be big match players, and there cannot be a greater occasion than an Indo-Pak World Cup game, more so when survival in the tournament is at stake. Kohli had one failure in the last game, and India couldn’t put up a decent score. The match against Australia just proved how overly dependent India have become on Kohli. A lot shouldn’t be expected of Yuvraj Singh since it is clear he hasn’t regained full fitness, but the performance of another southpaw, Suresh Raina, could matter a lot. Time and again, Raina’s quick cameos have made the difference for India.

Following their struggles in the last match, India would have to rethink their bowling strategy as well. The three-spinner theory didn’t work against the Aussies, and it definitely won’t against Pakistan. Despite their poor bowling efforts in the last game, Harbhajan Singh and R. Ashwin should retain their places, with Irfan Pathan and Zaheer Khan as seamers. The latter, like Sehwag, has been under fire for not performing to potential. But, there is no point in risking a less experienced bowler for such a big game.

As mentioned earlier, India are very well aware of their targets. Implementation would matter.