England lost three wickets in eight overs before recovering to 75-3 at lunch against Sri Lanka on day one of the second test on Friday.

England lost three wickets in eight overs before recovering to 75-3 at lunch against Sri Lanka on day one of the second test on Friday. 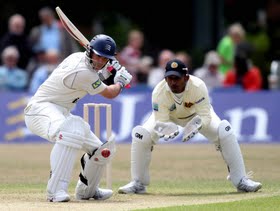 Strauss scored just a single boundary from 12 deliveries before he fell lbw to Chanaka Welegedara, leaning across a delivery that was on course to clip the top of leg stump. Trott, whose 203 in the first test meant he averaged a remarkable 66.77 going into the match, went the same way to Suranga Lakmal for just 2.

Pietersen's poor form continued as he drove at a swinging delivery from Lakmal and was caught by Dilshan, also for 2.

But Ian Bell and Alastair Cook each hit 32 not out in an unbroken fourth-wicket stand of 53.

Bell, though, was prone to England's uncharacteristic uncertainty at the crease and was lucky not to depart when on 8 and 18, putting Lakmal through the slips for four on both occasions.

A third edge dropped just short of the slips when he was on 26, his soft hands ensuring the ball did not carry, and survived an lbw appeal on 27 when Farveez Maharoof struck the knee roll — replays showing that the umpire's not out decision was correct since the ball was narrowly missing leg.

Cook scored slowly but got his feet moving well on a grassy pitch offering little swing, suggesting that Dilshan may have got all the reward he is going to receive for putting England in.

That surprising decision perhaps was a reaction to Sri Lanka's heavy defeat in the first test in Cardiff.

Sri Lanka scored 400 after winning the toss and choosing to bat but lost by an innings and 14 runs following a remarkable final-day collapse.