England will be a step closer to its dream of top spot in the world if they beat Sri Lanka in the third Test at the Rose Bowl starting on Thursday.

England will be a step closer to its dream of top spot in the world if they beat Sri Lanka in the third Test at the Rose Bowl starting on Thursday.

A win means equal-second place in the ICC rankings alongside South Africa on 117 points, though India would still be 11 points clear at the top. India begin a three-Test series against a weak West Indies side on the scheduled fifth day of this match. 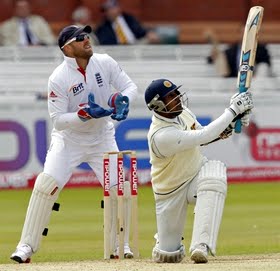 Sri Lanka fought back strongly in the second Test at Lord's after an innings defeat in the first Test at Cardiff largely thanks to 193 by captain Tillakaratne Dilshan. It has kept the series alive.

But the visitors will be without Dilshan, who broke his right thumb at Lord's. He was their leading runs scorer in the first two Tests with 253 at 84.33. Neither of their world-class batsmen, Mahela Jayawardene nor Kumar Sangakkara, has scored a Test 50 so far in this series.

They may struggle to take 20 wickets on what will probably be a good batting surface and with their bowlers having taken only 21 wickets in the first two Tests. Of those 21, the pacemen have taken 13 between them at an average of 66.08 and at four runs per over.

The spinners have fared slightly better, with eight wickets at 52.75 and 3.23 runs per over. The 21-year-old batsman Lahiru Thirimanne, who scored 104 at Chelmsford, may play in place of Dilshan and they may include a second spinner in Suraj Randiv or Ajantha Mendis in the absence of Dilshan's part-time offspin.

The Rose Bowl will have a feel-good factor for England, which won both ODIs there last season against Australia and Pakistan. Eoin Morgan scored fast hundreds in both games. The victory against Australia began a roll which continued throughout the winter. The win against Pakistan meant England won a series played out acrimoniously following the spot-fixing allegations against captain Salman Butt and two Pakistan bowlers.

England's opening pair of Andrew Strauss and Alastair Cook have been awarded an OBE and MBE respectively in the Queens' birthday honours list. If England wrap up the series it will be Strauss' fifth series win in a row.

This is Cook's 66th consecutive Test, breaking the record held by Alan Knott and Ian Botham for the most consecutive Tests played for England. He has scored six centuries in his last nine Tests, his last 12 innings. Since the first Test in Brisbane in November he has scored 1,101 runs at 122.33 with five hundreds and three 50s. In the same period, Jonathan Trott has scored 708 runs at 88.50 with three hundreds and two 50s.

Surrey players Kevin Pietersen and Chris Tremlett will be returning to Hampshire and their former club ground for this Test. Tremlett played regularly for the county for 10 years whereas Pietersen played just seven first-class games in five seasons. Pietersen may have laid his slow left-arm demons to rest after scoring 72 off 124 balls in the second innings at Lord's. He was eventually bowled by Rangana Herath, the 20th time he has fallen to a slow left-armer, but had at least — very carefully — scored 19 runs off 48 balls before he was dismissed.

For England, Anderson will be back and so Steve Finn may miss out again. He was dropped after the third Test in Perth last December, despite being the leading wicket-taker on either side in the series at that point with 14 wickets from three Tests. At Lord's, he exceeded Botham as the youngest player to take 50 wickets for England.