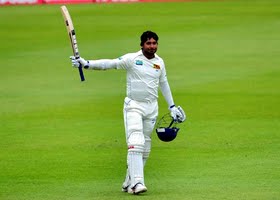 Sri Lanka were 334 for five in their second innings in reply to England's first innings 377 for eight declared, a lead of 141 at tea on the last day of the third and final Test.

And a draw was made all the more likely when rain, which had already robbed this match of 155 overs, fell just as the tea break started.

Sangakkara fell shortly beforehand for 119, when the left-hander's square cut off James Anderson was caught by substitute Adam Rouse at backward point.

His exit ended a fifth-wicket stand of 141 with Thilan Samaraweera.

But Samaraweera was still unbeaten at the interval, closing in on a hundred of his own on 87 not out in the first Test ever staged at southern county Hampshire's headquarters. Prasanna Jayawardene was unbeaten on six.

It appeared England would have to settle for the 1-0 lead they secured by an innings and 14-run win in the first Test in Cardiff, a result followed by a second Test draw at Lord's.

Sangakkara had managed just 65 runs in five previous innings this series but, leading Sri Lanka in the absence of the injured Tillakaratne Dilshan, the left-hander restored some pride for the tourists with his 25th Test century.