World Cup new target for England after No.1 in Tests: Andy Flower

After achieving the No.1 spot in Test cricket, England coach Andy Flower has now set World Cup as a new target for his team. 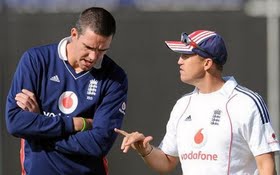 After achieving the No.1 spot in Test cricket, England coach Andy Flower has now set World Cup as a new target for his team.

"There's no way our goal will be just trying to maintain that status. We've got to have something more exciting than that. England has never won a 50-over World Cup, so 2015 is something we've already started planning towards," Flower was quoted as saying by BBC.

England have never won a 50-over World Cup. Their only world title was the World Twenty20 that they won last year. They are currently ranked only the fifth best one-day international team.

Pace spearhead James Anderson told BBC Radio 5 live's Sportsweek that every nation wants to be number one in all forms of the game but it very rarely happens that way.

"We have conquered one step and we are the best Test nation in the world at the moment. Now we can push everything else forward hopefully," he said.

Anderson said that Flower had a great influence on the team.

"When he came in, he sat us down and showed us exactly what we needed to do to become number one in the world and that pretty much meant not losing a series.

"He has given us a lot of responsibility - on and off the field - and has treated us like adults. He's helped us throughout the team and really does push us in practice.

"He's very, very tough but he does it for one purpose only and that's to improve us as cricketers and as a team," said Anderson.