Solid Kohli saves the day for India from Kiwi pacers

Virat Kohli and MS Dhoni saw India through the second day’s play without any further inroads as the hosts are trailing behind by 82 runs with 5 wickets in hand.

Update at Stumps on Day 2: Virat Kohli and MS Dhoni saw India through the second day’s play without any further inroads as the hosts are trailing behind by 82 runs with 5 wickets in hand. Kohli is approaching his 2nd Test century having put up two fighting partnerships today – first of 99 with Suresh Raina and then an unbroken one of 104 with Skipper Dhoni.

India lost the wicket of Suresh Raina after Tea to find itself under pressure again at 179 for 5 in the 51st over. Suresh Raina, who batted well for his 55 (from 90 balls with 9 fours and a six), once again was caught down the legside in an attempted glance with the lucky bowler being Tim Southee. 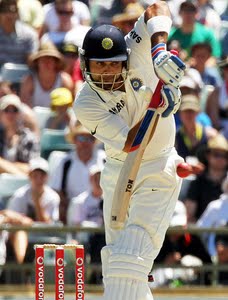 MS Dhoni, who replaced Raina, was positive from the word go and his two consecutive sixes off Jeetan Patel meant that India was keen in maintaining the run flow with attacking strokeplay. New Zealand lost out to the partnership between the solid Virat Kohli and MS Dhoni. Although there were a few edges off both the batsmen, none of them carried to the slip cordon for the Kiwis. Kohli finished the day on 93* (from 174 balls with 12 fours and a six) while MS Dhoni has moved onto 46* (from 70 balls with 5 fours and 2 sixes). India closed Day 2 at 283 for 5 in 78 overs.

With the new ball due tomorrow morning, India will have to bat well for an hour atleast to get closer to New Zealand’s 365.

Update at Tea on Day 2: A superb partnership between Suresh Raina and Virat Kohli rescued India from a precarious position of 80 for 4 to 168 for 4 by Tea. Raina started an entertaining counter attack and soon Virat Kohli complemented him to take India out of the woods atleast in this session.

The afternoon session started on a disastrous note with Virender Sehwag (43 from 60 balls with 8 fours) getting caught by a diving Flynn at mid wicket while playing a reckless flick off Doug Bracewell. India was under pressure at 67 for 3 in the 22nd over but soon it was 80 for 4 as Sachin Tendulkar (17) got cleaned up through the gate in a flick across the line to a full length inswinger from Bracewell.

New Zealand had India in a soup but an attacking Suresh Raina batted freely to keep the scoreboard moving. After getting some quick runs, Raina settled down along with Kohli to carry India safely to 168 for 4 in 47 overs with the deficit coming down to 197 runs. Raina is on 51* (from 79 balls with 8 fours and a six) while Kohli has got to 33* (from 67 balls with 4 fours and a six). There was one important incident in the afternoon session when Suresh Raina was stumped out by Kruger van Wyk after overbalancing in a forward defence and getting beaten by the turn and bounce but only to survive because of Jeetan Patel overstepping the bowling crease for a noball.

Update at Lunch on Day 2: India are under pressure losing two early wickets after bowling out the Kiwis for 365 this morning. Gautam Gambhir (2) was clean bowled offering no shot on the backfoot to an indipper Tim Southee in the 4th over while first Test centurion Cheteshwar Pujara (9) was caught off a top edge hooking the same bowler’s bouncer to long leg.

By lunch though, India have recovered slightly thanks to the presence of a subdued Virender Sehwag, who is batting on 39* (from 56 balls with 7 fours). Sehwag is batting along with Sachin Tendulkar, who seems to be going into a shell with 4* from 41 balls.

Early on, New Zealand resuming on 328 for 6 collapsed quickly to 365 all out on Day 2 at Bangalore much to the delight of India. Pragyan Ojha wrapped up things with a 3rd five-wicket haul of his career. It was a good morning for India as Kruger van Wyk added only 8 runs to his overnight score of 63 before getting brilliantly caught by a diving Suresh Raina to his right at second slip in an attempted steer to thirdman off Zaheer Khan. Another overnight batsman Doug Bracewell (33) was run out backing up at the non-striker’s end when the bowler Zaheer Khan deflected a straight drive onto the stumps.

Umesh Yadav chipped in with the wicket of Jeetan Patel (0) who upper cut his short ball into the hands of thirdman followed up by Pragyan Ojha trapping Tim Southee (14) lbw with a flighted delivery around middle which turned just enough to hit his backleg. The Kiwis were bowled out in 90.1 overs for 365 with Pragyan Ojha capturing 5 for 99 in 28.1 overs.

Build Up to Day 2: The second day’s play will see an early start at 9:00 AM to make up for the lost overs due to bad light and rain yesterday evening. New Zealand will resume at 328 for 6 in 81.3 overs with the second new ball just three balls old. The Kiwis with a nice partnership going on between Kruger van Wyk and Doug Bracewell will be looking to put up atleast 400+ on the board.

The pitch for Day 2 looks pretty good for batting and it’s the cracks on it that are expected to get wider and wider as the match progresses. The forecast is for rain as it has been for the last few days in Bangalore.