Can England stay alive in the World T20?

They are the defending champions, but they haven’t played like one at all. It is only the win against Afghanistan that has got them this far. Against India, they were extremely poor and in the clash against West Indies were always second best.

They are the defending champions, but they haven’t played like one at all. It is only the win against Afghanistan that has got them this far. Against India, they were extremely poor and in the clash against West Indies were always second best. Another defeat at the hands of New Zealand, and the Englishmen might very well be preparing to pack their bags for back home. The Kiwis, in contrast, would like to better their showing against Pakistan and Sri Lanka. In both games, they have given the opponents a tough fight, but failed to cross the finishing line. The loss against the hosts would have been particularly heart-breaking for them considering the match went into the Super Over. 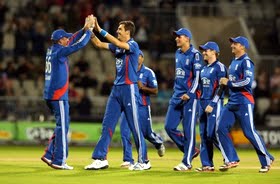 The problems for Stuart Broad’s men begin right at the top of the batting order. In each of the three games played so far, they have lost at least one wicket in the first over (two, in fact, against West Indies). When a side gets off to such a start, they are put on the backfoot straightaway. Craig Keiswetter has been the major culprit for England, failing in each of these games. He was the hero of England’s win in the 2010 World T20 final, but needs to get some runs for his side in this tournament. Owing to the poor start, England struggled against the Windies in spite of heroic recovery acts from Alex Hales and Eoin Morgan.

Even in their bowling performance against West Indies, they were insipid. Johnson Charles had it easy as England bowlers did nothing to trouble him. And evenwhen Chris Gayle joined in the fun, there was precious little the Englishmen could do. This sense of helplessness has been central to England’s woes in this series, and they would need some inspiration to overcome the same. Are they missing Kevin Pietersen? Graeme Swann would be one man England would look up to considering Kiwis’ perceived weakness against spin.

If England are struggling, New Zealand are not favourites by any sense. They too have been on a losing curve but, unlike England, have been very competitive. What they need to find is that winning formula. Against Pakistan, they left things too late, and Sri Lanka had better talent in their armoury to pull off the Super Over win. Like always, Brendon McCullum’s performance would be the key again for New Zealand. At the same time, they would have been pleased to see Rob Nicol get among the runs. And now, if the rest, including skipper Ross Taylor, can contribute, the Kiwis could put the English bowling under pressure.

With the ball,Daniel Vettori’s role will remain crucial. Even though he hasn’t picked up too many wickets, New Zealand would be banking on his economy to keep the Englishmen quiet. One also wonders if they would consider playing rookie left-arm Ronnie Hira considering the spinning conditions, and England’s struggle against slow bowling in the tournament.

To keep it simple, both teams need to win to stay alive.

Plenty of sports to choose from betting-sites.in and enjoy HD quality live casino games from all around the world.