The second day of the CLT20 will kick off with IPL runner-ups Chennai Super Kings taking on the Sydney Sixers. M S Dhoni’s men have been among the most successful bunch in T20 cricket, having won the IPL in the past and even the CLT20 earlier. Being so, they would be confident going into this latest tournament. Although the Sixers aren’t as experienced in terms of success they have some big names in their side, most of whom have represented Australia with reasonable distinction. The CLT20 presents them with a great opportunity to prove that they can compete against the best T20 sides from outside Australia as well. 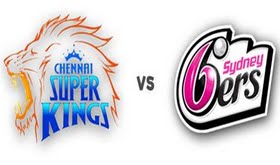 But for some excellent cricket by KKR, Chennai might well have retained the IPL trophy this year as well. Still, the fact that they made it to the finals of the event despite being well below par for most part reiterated why they are such a dangerous side in this format. Dhoni hasn’t been having a great time with the bat recently, one of the reasons India did not do well in the World T20. He must be keen to get back among the runs. Dhoni apart, Chennai have some exceptional talent in the batting department, which has been the key to their overall success. Michael Hussey, Suresh Raina, Murali Vijay and Albie Morkel, all have combined to give Chennai some rollicking batting performances. While the latter has been underutilised by the Proteas, Dhoni has used him very well as a floater in the batting order.

Shifting to their bowling, Chennai would expect a lot out of left-arm seamer Doug Bollinger as well as the other Aussie paceman in the side, Ben Hilfenhaus. Their spinners would also have an important role to play in Chennai’s campaign. As always, Dhoni would bank of Ravichandran Ashwin to give him the big breakthroughs while Shadab Jakati should continue to play as the second spinner.

The Brad Haddin-led squad has some very reliable names in their midst – none more than Shane Watson, who single-handedly pushed Australia into the semis in the World T20. Watson batted and bowled with a rare degree of authority, and would be keen to continue the same in the CLT20 as well. They are slightly weak in the batting department, which means Haddin and Watson will have to burden additional responsibility. Among the other names, big scores would be expected from Michael Lumb and Nathan McCullum.

It is in their bowling that Sixers’ strength lies. Pat Cummins and Mitchell Starc are raw and young, but have already proved that, with their pace, they can be rather difficult to counter. They would seek support from left-arm spinner Steven Smith, who can tie down batsmen with his yorkish length. Then again, McCullum can roll his arm over and produce some tight overs.

Both the sides, coincidentally led by wicket-keeper batsmen, would be keen to get off the blocks with a win, for sure.