Kumar Sangakkar’s ODI success a tribute to his versatility

This year’s ICC awards saw a surprise winner as the ODI Cricketer of the Year – Sri Lanka’s gentle giant Kumar Sangakkara. No, it isn’t as if the elegant left-hander did not deserve the honour.

This year’s ICC awards saw a surprise winner as the ODI Cricketer of the Year – Sri Lanka’s gentle giant Kumar Sangakkara. No, it isn’t as if the elegant left-hander did not deserve the honour. He did everything meritable to walk away with the trophy, but it is just a fact Sangakkara’s game is not cut out for the shorter version of the game that makes his performance and the triumph even more phenomenal. Sangakkara has won the Cricketer of the Year award last year, and this is another feather in his cap. In an era of heavy bats and brutal stroke play, Sangakkara has done as well as the best in one-dayers by sticking to his natural game. 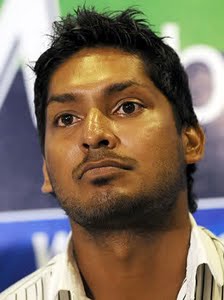 For the record, Sangakkara amassed 956 runs in 21 one-day matches averaging close to 64 with two hundreds during the 12-months period looked at for the awards to walk away with the honour. Both his hundreds during this period were high-quality match-winning efforts. He compiled an unbeaten 134 off 135 balls against England in the Champions Trophy group match at London. The knock was special in the sense that it came with the Lankans chasing a huge score of 294 to win. Sangakkara’s magic ensured that they got to the target with ease.

Sangakkara’s second hundred during the phase in consideration was in stark contrast to the first. This time Lanka were kicking off an ODI series at home against the strong South Africans. Sangakkara set the tone of the series for the hosts, as Sri Lanka batted first in the opening game of the series at Colombo, and the left-hander came up with a magnificent knock of 169. The amazing aspect of the innings was that Sangakkara, who is usually known to take his time, scored his runs off just 137 balls, with 18 fours and six sixes. Lanka won the game by a massive margin of 180 runs, and went on to clinch the series 4-1.

While Sangakkara was always destined for greatness in Test matches, his success in the 50-over format is a tribute to his versatility and his ability to adapt to different challenges. Sangakkara averages 57 in Tests after 117 Tests with 33 hundreds. These are great figures in itself, but he also has an equally impressive ODI record – with 16 hundreds and close to 12000 runs in the format averaging just over 40. His strike rate of 77 is on the lower side, but in recent years he has improved on that aspect as well significantly.

Sangakkara is 36 now, and most countries do away with old hands at this stage. But, Lanka cannot afford to keep Sangakkara away since he, along with Jayawardene and Dilshan, also in their mid-30s, remain the cornerstones of Sri Lanka’s batting line-up in one-dayers even now. It is ironical that a period when all nations are looking at younger legs to lead them into the 2015 World Cup, Sri Lanka cannot imagine the side without the likes of Sangakkara and co,