Indian skipper Virat Kohli paid Rohit Sharma a great compliment by terming him the best batsman in the world after his fourth century in this World Cup put India in the semi-finals.

Batting first after winning the toss, Rohit scored a brisk 104 and featured in a 180-run stand for the opening wicket with Lokesh Rahul, who struggled his way to 77. Rishabh Pant's quick 48 ensured India crossed 300, but Mustafizur Rahman's five-for kept India down to a gettable target of 315.

Bangladesh began reasonably and fifties from Shakib Al Hasan and Saifuddin kept them in the hunt. However, no one could go on to make a score, which eventually hurt Bangladesh. Jasprit Bumrah once again shone for India with 4 for 55, cleaning up the tail, while Hardik Pandya claimed three important scalps. 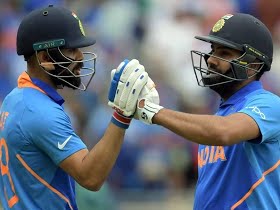 Speaking at the post-match presentation, Kohli showered accolades on Rohit. “I have been watching it (Rohit batting) for years now. He’s the best One-day player around and we are so delighted to see him. When he plays like that, everybody is happy to see him strike this so well."

On his innings, Rohit said, "I had a great feeling right at the start. The pitch was good to bat on. Initially wanted to take some time and then assess where we go from there. That's how it has been for me at this World Cup. The first game against South Africa the conditions were challenging, so I had to take my time. Against England as well the pitch was two-paced and wasn't coming onto the bat as normally I would like to and they used the slower balls really well. But again batting first there is no pressure of the scoreboard."

Asked about the secret of his amazing consistency, he explained, "My mantra is whatever has happened in the past, keep it in the past. It is a new day, present day and I don't try to think about what has happened. That is very critical from a team's point of view, the guys who are batting well should carry on and get the team to a good total. What has happened today has happened, I need to focus on the next game now."

Meanwhile, Bangladesh skipper Mashrafe Mortaza rued the fact that no one could notch up a big score in the match. "This was the match we had to win. We couldn't make it but there was some good performance by Mustafizur. One of them had to go on and score 80-90. Bit of luck could have gone our favor," he admitted.

"The tournament has been nice, exceptional performance by Shakib and Mushy batted really well right through. We will try to play our best in the last game. They were here supporting us today as well," Mortaza said, summing up Bangladesh's effort in the World Cup.