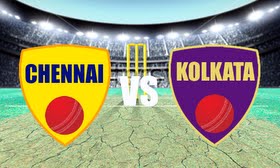 Preview:Chennai return script could not have been written any better as Bravo turned around a lost cause almost single handedly before it took a one-legged Jadhav efforts to seal the deal for them. As they get ready for their first game at home, one cannot imagine what the noise and expectation levels will be like.
Kolkata on the other hand came up on top against the Bangalore thanks to an all-round effort from Narine. A miserly spell with the ball and a 19 ball 50 has already sent a message across to the teams that he means business as usual this season.
The only cause of concern for Chennai will be the fact that Jadhav could be out for a couple of weeks after he pulled a hamstring against Mumbai. While they do have a domestic replacement in Murali Vijay, they might just opt to get in Faf du Plessis to strengthen the batting and replace Mark Wood, who was expensive in the first game, with Shardul Thakur. They will also have to be wary of Kuldeep Yadav and Narine, given their struggles against Mayank Markrande in their opening fixture.
Match Stats:
With his 17 ball 50 the other night, Sunil Narine became the first player to score two fifties for 17 or fewer balls in the history of the IPL
Dwayne Bravo became the first player to hit three sixes of Jasprit Bumrah in T20s
Raina has scored 838 runs against Kolkata in all T20s, going past 50 in eight of the 20 innings against Kolkata. This includes a century in the final of the 2014 Champions League
Teams :
Chennai XI team: SR Watson, AT Rayudu, Suresh Raina, Murali Vijay, MS Dhoni(c)(wk), DJ Bravo,Harbhajan Singh, Ravindra Jadeja, Deepak Chahar, Mark Wood, Imran Tahir, Karn Sharma, Faf du Plessis,Shardul Thakur, Mitchell Santner, Sam Billings, Lungi Ngidi, Narayan Jagadeesan, KM Asif, Kshitiz Sharma, Monu Kumar, Kanishk Seth, Dhruv Shorey, Chaitanya Bishnoi
Kolkata XI team: SP Narine, CA Lynn, Robin Uthappa, Nitish Rana, Dinesh Karthik(c)(wk), Rinku Singh,Andre Russell, R Vinay Kumar, PP Chawla, MG Johnson, Kuldeep Yadav, Ishank Jaggi, Javon Searles,Apoorv Wankhade, Cameron Delport, Tom Curran, Shubman Gill, Kamlesh Nagarkoti, Shivam Mavi