India won the third and last ODI by 83 runs at Harare to clean sweep the series 3-0. Batting first, India put on 276/5 in their quota of 50 overs, mainly thanks to Kedar Jadhav for his century and debutant Manish Pandey for his 71.

India won the third and last ODI by 83 runs at Harare to clean sweep the series 3-0. Batting first, India put on 276/5 in their quota of 50 overs, mainly thanks to Kedar Jadhav for his century and debutant Manish Pandey for his 71. Chasing a formidable score, Zimbabwe could only manage 193/10 and handed an easy 83 runs victory to team India. 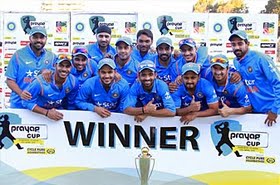 Like the first two matches, this time too Zimbabwe won the toss and elected to bowl first. Indian openers were not able to provide solid start this time around. Skipper Ajinkya Rahane lost his wickets when the score was just 25 runs. He closed the face of his bat too early and ball popped in air to be caught by Utseya in covers off Madziva. Two overs later, Murli Vijay poked a ball outside off stumps and wicket-keeper took it easily. Uthappa was promoted to the batting order and he was batting well. Uthappa added 35 runs with Manoj Tiwary for the third wicket. Tiwary was clearly struggling to score the runs as he managed only 10 runs off 33 balls. His struggle at the crease ended in 19th over when Utseya caught him off his own bowling. Robin Uthappa too mistimed a sort and caught by Chigumbura at mid-off. At this juncture of time, India were in deep trouble, with four main batsmen back in hut with score of mere 82 runs in 22nd over. This was the time when debutant Manish Pandey joined hands with Kedar Jadhav. Manish played with more freedom and confidence and the failure in his first three international innings were clearly in the back of mind of Jadhav. Both concentrated in taking singles and twos early in their inning and brought up their fifty. Though, Kedar was little lucky when fielder at square cover dropped a sitter off Cremer when he was at 41. But he made full use of this escape and started accumulating quick runs. Jadhav was a bit more adventurous with his dabs and paddles, but he batted largely safely too. Jadhav moved to his fifty off 64 balls and it took only 22 balls more to reach to his maiden ODI century.

Bhubneshwar Kumar began the India’s proceeding with the ball superbly and he conceded only 12 runs off his 6 overs but he was not lucky enough to claim any wickets as he made the ball to move both ways, climb up and sometimes hold its line too. It was Chibhabha show again for the hosts as he was very severe on anything short and wide. He added 70 for the second wicket with Regis Chakabva and 53 for the fourth with Richmond Mutumbami. Chigumbura was the third wicket to fall, he was trapped in front of wickets off Murli Vijay for his maiden ODI wicket. Zimbabwe kept losing wickets at crucial junctures. Whenever partnership grew up and looked to be threatening for the Indians, Zimbabwe batsmen threw their wicket away. They had more than a decent chance when 127 runs were needed off 91 balls and they had 7 wickets in hand. But then the collapse began as Binny sent back Mutumbami and Chibhabha in successive overs. Jadhav took a running catch from deep mid-wicket to get rid off Chibhabha. Harbhajan Singh took two wickets in his last over and Zimbabwe were eventually bowled out for 193 in the 43rd over.

The first off the two T20 international between these two teams will be played on 17th of July.

Man of the Match: Kedar Jadhav

Man of the series: Ambati Rayudu