India won the Mohali Test rather comprehensively, inside three days on a spinning track.

India won the Mohali Test rather comprehensively, inside three days on a spinning track. While South Africa had their moments in the match, mostly with the ball, India were undoubtedly the more dominant of the two sides. Here's a look at five match-defining performance by Indians in the Test.

Ravindra Jadeja: What a memorable comeback it was for the all-rounder (at least in India) on a turning track. His eight wickets in the match were good enough to for him to claim the match of the match. The two dismissals in the game, where he got Faf du Plessis and Hashim Amla shouldering arms, stood out. The South African batsmen clearly failed to read him, and had a price to pay for the same. Even as his spin bowling was deadly on the Mohali track, his contribution wasn't restricted to that. On a tough surface, he made a crucial 38 in the first innings to ensure India at least got close to 200. 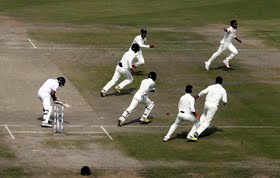 Ravichandran Ashwin: The offie returned from injury, and got into the groove straight away. Defending a small score, India needed their key bowler to stand up. And, Ashwin delivered. His five-wicket haul in the first innings was instrumental in India gaining a slender lead. His five-for included the scalps of the South African openers, and Amla, whom he managed to have stumped. In the second innings, he claimed du Plessis, and the set Stiaan van Zyl to put India on the road to victory. In the context of the match, his first innings 20 was also crucial.

Murali Vijay: The Indian opener continued his good form with the bat. In India's first innings, he was the only batsman to demonstrate control even as most others struggled. Vijay had precise foot movement against both spin and pace until he was dismissed. Had it not been for his first-innings 75, the match could have taken a different course. Vijay's knock gave the bowlers something to defend. He played an important role in the second essay as well. His composed 47 settling the nerves in the Indian camp after Shikhar Dhawan registered his second duck.

Cheteshwar Pujara: He came into Mohali on the back of a match-winning hundred in Sri Lanka. And, he did not let his form slip. Pujara's second-innings 77 held things together for India and saw to it that South Africa had a tricky chase on their hands. He looked in good control during his stay out in the middle, until the guile of Imran Tahir got the better of him. He had done his job by then though. Although he would be disappointed at having gotten out for 31 in the first innings, in hindsight it was a key knock as well.

Amit Mishra: He picked up only three wickets in the Test. Only paper that wouldn't qualify as a match-defining effort. But, this is where stats can often be unfair to cricketers. Of the three wickets Mishra claimed in the Test, he twice dismissed de Villiers -- that alone is a massive achievement. Only both occasions, he got through the genius South Africa's defence, in the first innings after de Villiers was threatening to take away the game. In the second essay too, he was looking dangerous.