IPL 8 36th T20 RR vs DD Preview, Live Scores: The tables have really turned in IPL 8. And the two teams who will be battling it out on Sunday evening at the Brabourne Stadium in Mumbai have experienced contrasting fortunes for sure in recent games.

The tables have really turned in IPL 8. And the two teams who will be battling it out on Sunday evening at the Brabourne Stadium in Mumbai have experienced contrasting fortunes for sure in recent games. After winning five matches in a row, Rajasthan have gone off the boil. They have lost three out of their last five matches, two of the others have been rained out. The loss against Mumbai Indians was their latest disappointment following reverses against Kings XI Punjab and Royal Challengers Bangalore earlier. Delhi, on the other hand, have risen to the fourth position after a disastrous start. They thrashed Punjab by nine wickets on Friday. 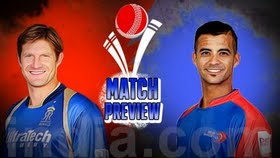 Delhi would clearly be the more confident of the two sides heading into the match at Mumbai. Their bowling, which hasn’t been overly impressive during the course of the edition, was in splendid shape against Punjab. Zaheer Khan made a brilliant comeback to the IPL, getting the scalps of Punjab openers Virender Sehwag and Manan Vohra cheaply. Nathan Coulter-Nile continued his good form with a superb bowling display, claiming four wickets in a match-winning spell. They have been aided by JP Duminy’s off-spin, who has been among the wickets.

Spin has definitely been a plus point for Delhi in this IPL. Imran Tahir with 13 wickets is among the leading wicket-takers in the event, and he has been well-supported by Amit Mishra, who has claimed 8 wickets. Delhi’s batsmen did not have a massive challenge against Punjab, but they would be pleased with the efforts of openers Shreyas Iyer and Mayank Agarwal, both of whom got aggressive half-centuries. Iyer has clearly been Delhi’s most impressive batsmen, and Agarwal is improving though he hasn’t been consistent. Duminy too has been among the runs even as the form of Yuvraj Singh remains a worry.

Rajasthan’s bowling was put to the sword by Mumbai Indians’ batsmen on Friday, which means they have some thinking to do in that department. Tim Southee, Rusty Theron and Shane Watson all struggled to control the flow of runs against Mumbai, Dhawal Kulkarni also went for runs although he picked up wickets. Ankit Sharma was the only bowler who was successful in maintaining some sort of control. Clearly, they will need to improve significantly against Delhi.

In the batting, Rajasthan are heavily dependent on Ajinkya Rahane. He failed on Friday, and the team’s struggles reflected how much his presence in the middle means to the team. Watson and Steven Smith got starts, but couldn’t carry on. Rajasthan would want more out of their senior men from Down Under. Deepak Hooda’s form has also fallen away after an impressive start. At the same time, Rajasthan would be pleased with the return to form of Sanju Samson, who almost turned the match around against Mumbai. Rajasthan would be desperate for a win to get their confidence back.