The Royal Challengers Bangalore (RCB) will take on the Rajasthan Royals (RR) in match number 39 of the Indian Premier League (IPL) 2022 at the Maharashtra Cricket Association (MCA) Stadium in Pune. This will be an evening game and hence will begin at 7:30 PM IST. RCB are in the fifth position in the points table, with five wins and three losses from eight matches. RR are third, having registered five wins and two losses in seven matches.

Bangalore will go into Tuesday’s match having suffered an embarrassing nine-wicket defeat at the hands of the Sunrisers Hyderabad (SRH) at the Brabourne Stadium in Mumbai. Batting first, the entire team was rolled over for 68 in 10.1 overs. Only two RCB batters got into double figures. The bowlers couldn’t do anything with no runs to defend.

RCB will look at the defeat as a one-off. Faf du Plessis hit form just a match before the disaster game. However, Virat Kohli’s form is a massive question mark. Bangalore could also look to replace Anuj Rawat with Mahipal Lomror at the top of the order. 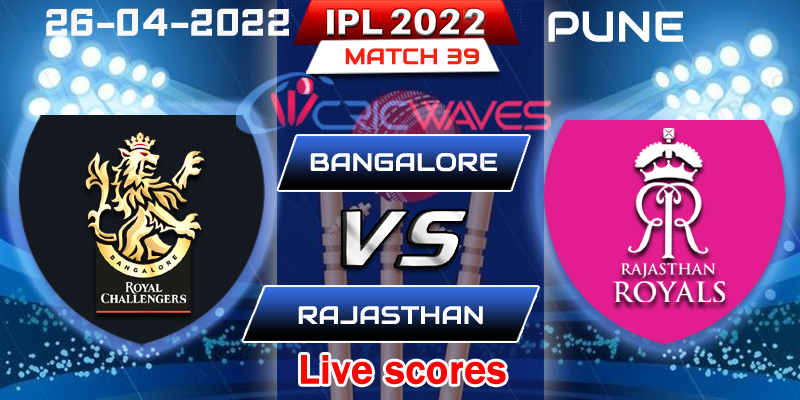 Rajasthan defeated the Delhi Capitals (DC) in a high-scoring thriller in their last game. Jos Buttler shone with his third IPL hundred and second in a row. Devdutt Padikkal scored a much-needed fifty while skipper Sanju Samson hammered an unbeaten 46 in 19.

They need to do some work on their bowling. Trent Boult and Obed McCoy went for plenty in the last match, which ended in controversy. Yuzvendra Chahal and Ravichandran Ashwin have done well with the ball while Prasidh Krishna was brilliant with 3 for 22 against DC.