Former India opener Virender Sehwag has said that some Board of Control for Cricket in India (BCCI) members convinced him to apply for India coaching job, and that he was never interested in it.

"I never thought of coaching the Indian cricket team. I was given an offer to coach the team. The BCCI (acting) secretary Amitabh Chaudhary and GM (Game Development) MV Sridhar came to me and requested me to think about the offer. I took my time and then applied for the position," Sehwag revealed in an NDTV report. 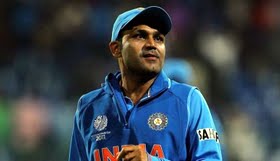 Sehwag went on to add, "I also had a word with Virat Kohli, he asked me to go for it. It was only then that I applied. If you ask for my opinion, I would say that I was never interested.

"I thought since they are requesting me, I should help them. I never thought of applying on my own nor will I ever apply in future," Sehwag went on to add in the NDTV report.

"If Ravi had applied earlier, then I don't think there would have been any chance of me applying for the post. I would have never applied," Sehwag further said in the NDTV report.