Mumbai Indians were under definite pressure going into the game against Kings XI Punjab at Mohali. But, they would have felt better knowing the opposition they were facing were under even greater pressure.

Mumbai Indians were under definite pressure going into the game against Kings XI Punjab at Mohali. But, they would have felt better knowing the opposition they were facing were under even greater pressure. This fact definitely reflected in their performance. Buoyed by a weak opponent, Mumbai put up a healthy batting and bowling effort to hold Punjab down. The hosts, on the other hand, did not help their own cause. They were ragged in most departments. While their batting and bowling was poor, their fielding was most disastrous as they dropped a number of crucial catches.

For Mumbai, the return to form of Parthiv Patel was undoubtedly the biggest gain from the triumph. While it is true that he was blessed by the largesse of Punjab's bowlers, it is equally a fact that Patel batted with resolve, and made best use of the chances that came his way. His knock of 81 from 58 set up Mumbai for a big total. The effort of Ambati Rayudu, who blasted 65 from 37, and featured in a whirlwind second-wicket stand with Patel was equally crucial. After the two were dismissed, Mumbai were still looking to deliver the finishing punch, which came in the form of a cameo from Jos Buttler.

Punjab's bowling was disappointing on the day, to say the least. While Sandeep Sharma stood out, conceding merely 20 runs in his four overs, the rest were easily taken for runs. Mitchell Johnson had a terrible day, as he was taken for 43 in his four overs. Axar Patel's poor run continued as he was taken for 11 runs per over. Mohit Sharma finished with three wickets, but he also went for plenty of runs. Punjab also tried out Pradeep Sahu, but his efforts were worse, as he conceded 35 in three overs. What made matters worse for Punjab was the fact that they kept dropping set batsman, with Patel even being reprieved off a no ball.

Having conceded a huge total, Punjab were always on the back foot, for their batsmen have been in extremely poor form this season. But, if Punjab wanted to take out positives going into the chase, it was definitely the fact that the team batting second has won the majority of the matches in this IPL. But, even that wasn't enough to encourage Punjab to push for victory. Their batsmen once again let the side down. Murali Vijay may have run out of opportunities to make an impression at the top while Manan Vohra also fell cheaply. Shaun Marsh batted well, but wasn't quick enough. Glenn Maxwell finally got a fifty while skipper David Miller raced away to 30. But, the 25-run loss was a clear indication of the gulf between the teams. 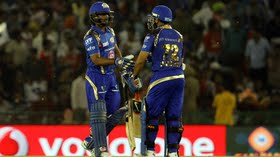 At one point of time, when Maxwell and Miller were batting, Punjab were in with a chance to push for victory. But, Mitchell McClenaghan and Jasprit Bumrah proved why they are highly rated as death bowlers. They mixed up things brilliantly, and before Punjab knew, the match was out of their grasp.