Mithali Raj: Chasing puts a little pressure, but I enjoy the challenge

India captain Harmanpreet Kaur was lavish in her praise of Mithali Raj after the senior cricketer’s half-century guided India to their second with in the World T20, against Pakistan.

"Mithali is a key player and we have to use her in a smart way. Pakistan are a good bowling side, she's a very good against spin and that's why we played her up there, it was a decision by the coach and me," Harmanpreet explained at the post-match presentation. 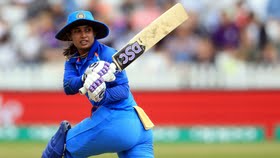 Raj herself stated that she was open to performing any role for the team. "I have always batted in the middle. I enjoy batting anywhere. Chasing puts a little pressure, but no matter what the challenge is, I always enjoy.

“I see there is no doubt that we will get to the semis, but as we go forward, we'll be playing strong teams, so we will have to bring our A game in every match," she stated.

Meanwhile, Pakistan were handed a 10-run penalty for running on the pitch. Reacting to the same, their skipper Javeria Khan said, "I had a chat with the umpires, they told me that our players were warned thrice and then the runs were docked. It was unprofessional on our part.”