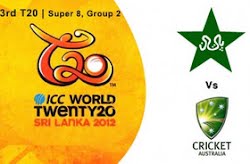 George Bailey has won the toss and Australia will bowl first. They are playing an unchanged team. Hafeez said he too would have bowled first. He says a target of 150 plus on this pitch will be tough to chase.

One change for Pakistan - Arafat replaced with Abdul Razzaq.

Message is straightforward for Pakistan - score as much as possible for the sake of the NRR.

Kevin Pietersen and Ajantha Mendis are the leading batsman and bowler in Twenty20 internationals.Check ICC T20 Rankings for more details

Sajjad: Pakistan can do something very serious, remember the semi final match in 2010 t20. Australia bowling was really tough and Pakistan went on to make 191 against that bowling line up.

If Pakistan lose to Australia, an Indian win will knock them out without NRR playing any part. Even if South Africa beat India in this scenario, Pakistan's chances remain bleak: if they lose their match by five runs (chasing 161), and if South Africa score 160 and beat India by the same margin, then Pakistan's NRR will be poorer than South Africa's.

Australia has to score 112 to make themselves sure for semi-final.