RR vs SRH Preview, Live: Rajasthan look to consolidate on triumph against Delhi

IPL 8 RR vs SRH Preview, Live Scores: After a winless streak that extended to five matches, Rajasthan Royals were back in their comfort zone against Delhi Daredevils, on Sunday at the Brabourne Stadium in Mumbai. They put up a fantastic batting show to win by 14-runs and remain in the top two in the points table

After a winless streak that extended to five matches, Rajasthan Royals were back in their comfort zone against Delhi Daredevils, on Sunday at the Brabourne Stadium in Mumbai. They put up a fantastic batting show to win by 14-runs and remain in the top two in the points table. The target for them against Sunrisers Hyderabad will be to keep the momentum going, which they have regained after some struggle. Sunrisers Hyderabad’s campaign has been up and down this season, and they have slid to number 7 in the points table following the loss to Kolkata Knight Riders.

Rajasthan’s win against Delhi was build on the back of a superlative batting performance from Ajinkya Rahane. The batsman from Mumbai has been rock solid for Rajasthan at the top of the order, and a majority of the team’s victories this season have been built on the back of a wonderful batting display by Rahane. At Brabourne, he found excellent support from Karun Nair, as the duo flayed Delhi’s bowling. Nair is definitely another talent who must be watched closely. With Shane Watson and Sanju Samson in form, Rajasthan look formidable. The likes of Steven Smith and Deepak Hooda have also come good occasionally. 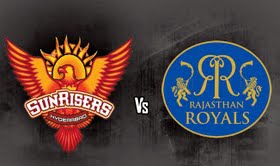 The bowling of Rajasthan is a slight cause of concern. In spite of having 190 to defend, the bowlers allowed Delhi to come rather close. Tim Southee hasn’t been very effective, and went wicketless against Delhi. Dhawal Kulkarni, Rajat Bhatia and Stuart Binny also conceded a lot of runs. It was thanks to the Aussie duo of Watson and James Faulkner that Rajasthan managed to keep Delhi in check. Rajasthan will need to exhibit improvements in their bowling.

For Sunrisers, the story has been rather predictable. If David Warner fires then win, if he doesn’t they lose. This all to familiar tale repeated itself against Kolkata as well at Monday at Eden Gardens, as Sunrisers were downed by 35 runs. This predictability is the main reason why Warner’s men are languishing at the bottom end of the table. Their batting is a huge weak link, with Shikhar Dhawan failing to deliver as well on days when Warner goes early. Moises Henriques played a good knock against Kolkata, but Naman Ojha, Eoin Morgan and Hanuma Vihari continue to disappoint.

Sunriser’s bowling is in decent shape, but their key bowlers disappointed in the last match. Dale Steyn, who has been in and out of the side, since the franchise has had to pick between him and Trent Boult, was dealt with rather easily while Bhuvneshwar Kumar also conceded plenty of runs though he was among the wickets. Sunrisers though should be pleased with the efforts of their spinners in the match, Bipul Sharma and Karn Sharma, both of whom kept things tight, and were among the wickets as well. But, with their batting in poor shape, Sunrisers will continue to need more out of their bowlers.