Who are Gurunath Meiyappan and Asad Rauf?

Two more big names have cropped up in the turbid spot-fixing scandal that has engulfed season six of the Indian Premier League. According to the latest , Gurunath Meiyappan has been arrested while a couple of days ago Pakistan umpire Asad Rauf, who has been officiating in IPL games...

Two more big names have cropped up in the turbid spot-fixing scandal that has engulfed season six of the Indian Premier League. According to the latest , Gurunath Meiyappan has been arrested while a couple of days ago Pakistan umpire Asad Rauf, who has been officiating in IPL games, was discarded from the ICC Champions Trophy’s list of umpires. We did some research to find out a bit more about the two tainted men, who are the latest to join the unending list of people coming under the scanner for their alleged role in spot-fixing in the controversial tournament. 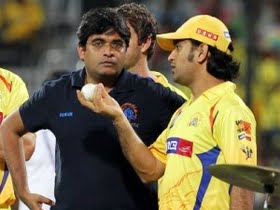 Gurunath Meiyappan: The bespectacled man, who was arrested by the Mumbai Police late on Friday night following his interrogation for over two hours, is none other than the CEO of Chennai Super Kings – the most successful franchise in the IPL -- and also the Team Principal, although India Cements, the owner of CSK, have denied the same in the statement, claiming that he is only a Honorary Member of the Management team. More significantly, Meiyappan is the son-in-law of N. Srinivasan, who is the BCCI President, and MD, India Cements. Said to be in his late 30s, Meiyappan wasborn in the AVM family. AVM is the oldest surviving film production studio in India.

Meiyappan married to Srinivasan’s daughter Rupa, who is a Wholetime Director of India Cements. The couple has two daughters and a son. Meiyappan’s name came into the picture after actor Vindoo Dara Singh, also arrested for his alleged role in spot-fixing, revealed that he was in constant touch with Meiyappan. During his interrogation, Singh admitted that he bet crores of rupees on behalf of Meiyappan as well as many others in this year’s IPL. Srinivasan’s estranged son, Ashwin, also claimed that Meiyappan is very much involved in the betting business, and that he has been in touch with bookies much before the IPL even began.

Asad Rauf: An umpire from Pakistan, Rauf is part of ICC’s elite panel of umpires. He was supposed to stand in some matches in the upcoming Champions Trophy tournament, but the ICC has struck his name off the list after reports of his alleged involvement in the IPL spot-fixing scandal began to surface. Rauf, who was a first-class cricketer in his younger days, is a highly experienced official at the international level. So far, he has umpired in 29 Tests, 72 ODIs and 13 T20s.

Rauf’s name also cropped up during Vindoo Dara Singh’s interrogation. There have been reports that a gift hamper with gold ornaments and other appliances, allegedly sent to Rauf by bookies, has remained unclaimed at the air cargo section of Delhi airport. With news of his alleged involvement in fixing surfacing, Rauf left India in a hurry. This is not the first time that the umpire from Pakistan has found himself in the centre of a storm. Last year, a Mumbai-based model, Leena Kapoor, alleged that Rauf sexually exploited her, having physical relations with her on several occasions on the pretext of marrying her, but later went back on his promise.