When the first Test between Sri Lanka and New Zealand began at Dunedin last week, it was unanimously agreed that the hosts would be favourites to win the match and the series.

When the first Test between Sri Lanka and New Zealand began at Dunedin last week, it was unanimously agreed that the hosts would be favourites to win the match and the series. A day after the Dunedin Test got over nothing has changed. New Zealand, on expected lines, thumped Sri Lanka in the game by a comprehensive margin. They were the better of the teams in each and everything department of the game. In fact there was hardly a session during the Test when Sri Lanka were dominant. They should not be too disheartened though, and must look to take away whatever positives they can.

Considering that Sri Lanka are in a rebuilding phase, they must set realistic goals for themselves in the near future. Of course, every team plays to win, but expecting the Lankans to get past New Zealand on the latter's home soil with the present side is far-fetched even for the most optimistic of Sri Lankan fans. As such, patience will be key to Lanka's possible revival in the future. They have a number of players who are just starting their international careers. And although a number of them are talented and highly rated in Lankan circles, it will be unfair on them to expect rollicking performances too soon. 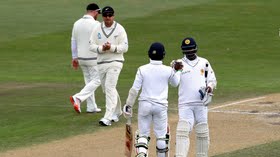 The mini-crisis in Sri Lankan cricket has emerged because most of their big names have walked into the sunset in recent times. In fact, it wouldn't be wrong to say that the three pillars of Sri Lankan cricket have fallen -- Mahela Jayawardene, Kumar Sangakkara and Tillakaratne Dilshan (the last mentioned still plays limited overs, but has retired from Tests). You cannot replace players like that. All three have had a tremendous impact in Sri Lankan cricket over the last decade and the half. Right now, Sri Lanka are not just missing their cricketing skills, their physical presence itself would have made a difference.

With the big three gone, it is important now that the players who have been groomed to take over start delivering. Dimuth Karunaratne has been opening the batting for a few seasons now with mixed success. The time has come for him to take on a senior role in the team. He needs to be more consistent and, hence, dependable. His effort at Dunedin was definitely a step in the right direction. Dinesh Chandimal is another player who has got reasonable experience to go with his talent. He has played a couple of stunning Test knocks recently. But, without doubt, Sri Lanka need more out of him.

The man who would be under most pressure for Sri Lanka is obviously their skipper Angelo Mathews. If he can shape this bunch of novices into a match-winning unit, history will look at Mathews as one of the team's greatest leaders. Undoubtedly, this will be the toughest challenge Mathews would have faced in his international career so far. The path in the near future is going to be rocky, and Mathews will need to prove himself as the men among boys. At the same time, Mathews would also have to deliver as the team's all-rounder. What better than leading from the front.