Retired India seamer Ashish Nehra feels Jasprit Bumrah can be good choice for the Newlands track for the first Test in Cape Town.

Retired India seamer Ashish Nehra feels Jasprit Bumrah can be good choice for the Newlands track for the first Test in Cape Town.

"Jasprit Bumrah can be a good choice for the first Test in Cape Town. I don't know what's there in the team management's mind but he is the kind of bowler, who can be an asset on the Newlands track during the first Test," Nehra told PTI in an interview, speaking on the South Africa tour. 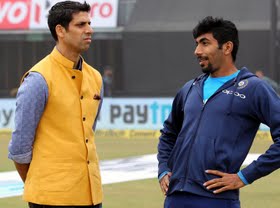 On why he feels, Bumrah could prove to be a good choice, Nehra added, "We have seen Bumrah primarily in white ball cricket but just go back a year and check out how many overs he had bowled for Gujarat in Ranji Trophy.

"He has the most lethal yorker among the five pacers along with good slower ones. Also he has an awkward high-arm action, which can be very difficult to pick initially. All these factors work in Bumrah's favour.”

The weather in Cape Town could play a vital role, Nehra further felt. "Cape Town, during January, can get hot and the conditions may not be seam-friendly. Now if it becomes humid and the pitch is a flat one, then Bhuvneshwar may not get the desired swing and seam movement,” he added.