Defending champions Mumbai Indians will have the definite edge when they take on an inconsistent Kolkata Knight Riders in match number 32 of IPL 2020 at the Sheikh Zayed Stadium in Abu Dhabi. Mumbai have been excellent in the tournament so far with five wins in seven games. KKR, on the other hand, are at the fourth position with four wins and three losses. They go into Friday’s contest having been bulldozed by RCB by 82 runs in their previous encounter.

MI skipper Rohit Sharma has scored both his half-centuries this season at Abu Dhabi. He would be keen to complete a hat-trick of fifties in the match against KKR. Sharma has looked in great form with over 200 runs, and made a fluent 80 the last time the two teams met. Quinton De Kock and Suryakumar Yadav have been among the runs as well. MI though would expect better consistency from Ishan Kishan, who hasn’t built on his sensational 99 against RCB.

The all-round trio of Hardik Pandya, Krunal Pandya and Kieron Pollard have done their job, particularly with the bat, with some sensational hitting. In the bowling department, Mumbai have been top notch with Trent Boult, Jasprit Bumrah and James Pattinson all being among the wickets, troubling the opposition with their pace. Leggie Rahul Chahar has also done a good containing job. 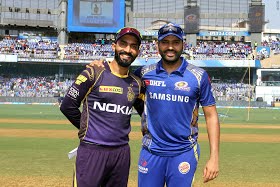 KKR have struggled because two of their biggest superstars have failed to live up to expectations. The big-hitting Andre Russell has only 71 runs from seven games. He has not been promoted up the order and has been unable to get going in the death overs. On the other hand, Pat Cummins, purchased for a record Rs 15.5 crore, has only managed two wickets at a strike rate of 78.

Kolkata possess a strong batting line-up in Shubman Gill, Eoin Morgan, Nitish Rana, skipper Dinesh Karthik and young Rahul Tripathi, but their consistency has been missing. The development of Sunil Narine’s action being reported has hurt KKR’s balance. It remains to be seen whether they risk him against Mumbai.

Head-to-Head Record: Mumbai have a dominant 20-6 win-loss record over KKR.

The pitches are getting slower. 160 is proving to be a challenging total. Batting first is the preferred choice.

There will be no respite for the players from the heat. Temperature will be in the mid-30s again.