Rajasthan Royals stunned Delhi Daredevils by 5 runs in the first match of IPL 6. Delhi Daredevils were in control of their run chase of 166 almost till the 19th over with Australian David Warner at the crease.

Rajasthan Royals stunned Delhi Daredevils by 5 runs in the first match of IPL 6. Delhi Daredevils were in control of their run chase of 166 almost till the 19th over with Australian David Warner at the crease. However, Warner got brilliantly run out by a direct throw from Brad Hodge which changed the match completely after that. Warner scored a responsible 77 from 56 balls with 9 fours and a six – a knock that wasn’t really attacking.

Warner didn’t get much support at the other end as the batsmen took too many balls and scored too little to keep Rajasthan Royals in the contest. The equation towards the end was 8 runs to get from the final over to be bowled by Kevon Cooper who held his nerve and got the ball right into the blockhole when it mattered. The Daredevils lost the plot despite having the likes of Johan Botha, Andre Russell and Irfan Pathan, who all failed to get the 8 runs off the final over.

Rajasthan Royals’ Captain Rahul Dravid who dropped a sharp catch at point had injured his calf muscle and had to leave the ground for much of the Delhi innings. Dravid for his knock of 65 from 51 balls got the Man of the Match award. There were two heroes for Rajasthan with the ball – Sreesanth who bowled a superb spell of 4-0-18-1 and Kevon Cooper who took 3 for 30 in his 4 overs. 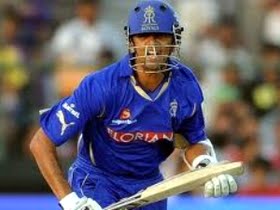 Delhi restrict Rajasthan to 165: Late strikes from Delhi Daredevils restricted Rajasthan Royals to 165 for 7 on an unusually good batting surface at the Feroz Shah Kotla. Veteran Rahul Dravid, walking in at no.3 played a Captain’s knock of 65 from 51 balls with 6 fours and 2 sixes. But it was Stuart Binny who provided the much needed energy to the Rajasthan Royals’ innings with a 20-ball 40 with 2 fours and 3 sixes.

Umesh Yadav was the bowling star for the Delhi Daredevils taking 4 for 24 in 4 overs. Apart from him, left-arm spinner Shahbaz Nadeed got away with decent figures of 4-0-22-1. The Daredevils had a poor day on the field but did extremely well in the last five overs or so in taking wickets and reducing the boundaries and sixes to a great extent.

Toss and Teams: Rajasthan Royals led by veteran Rahul Dravid have won the toss and elected to bat first against hosts Delhi Daredevils at the Feroz Shah Kotla. Unlike the first three games which saw the side winning the toss deciding to chase, Rajasthan Royals have decided to bat first instead – the reason could be the notorious nature of the Feroz Shah Kotla wicket.

Virender Sehwag misses out with an injury for the second match in a row for the Daredevils. The four overseas players for Delhi are Jayawardene, Warner, Russell and Botha. The Rajasthan Royals are fielding Brad Hodge, Samuel Badree, Kushal Perera and Kevon Cooper.