South Africa went into the series against India having not lost a series away from home in nine years. That came to an end at Nagpur on Friday as India's spinners continued their domination on a crumbling pitch

South Africa went into the series against India having not lost a series away from home in nine years. That came to an end at Nagpur on Friday as India's spinners continued their domination on a crumbling pitch. South Africa did put up unexpected resistance in the form of a 72-run stand between Hashim Amla and Faf du Plessis, both of whom contributed 39 each. But, before and after they had little to cheer about as Ravichandran Ashwin claimed his fourth 10-wicket match haul, and Amit Mishra chipped in with key wickets as well.

The partnership between du Plessis and Amla, which lasted close to 47 overs, was a combination of luck and pluck in equal measure. While things were undoubtedly tough out in the middle, the fact that the surface got excruciating slow worked in the batsmen's favour to an extent. As so when the ball was pitched up, the experienced South African duo went on the front foot and smothered the spin. When pitched short, the duo was confident enough of playing it off the back foot, knowing they had enough time to cover the spin. The edges also did not carry. More than once, they fell short of the slips. 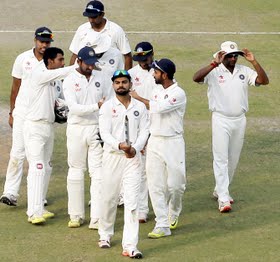 Rather unbelievably, Ravindra Jadeja went wicketless. What the Indian bowlers did well however was keep things tight and not falter during the pressure period. Eventually, they were rewarded. Amit Mishra sent both du Plessis and Amla back just before tea to derail the little hopes that the visitors may have harboured. Mishra bowled two unplayable deliveries to both. The ball to Amla jumped at his defensive stroke, and there was no way he could control it. Then, du Plessis having just driven a wrong 'un from the leggie, tried to repeat the stroke, but this time the ball kept agonisingly low, and literally crawled into the stumps.

The start, yet again, was horrible for South Africa. Dean Elgar came in having decided that there was no point hanging around on such a surface. He thus proceeded to slog sweep Ashwin for six. But, the offie had the better of him soon as he found the edge off a defensive shot from Elgar, and the ball popped up for an easy catch. The bigger scalp was to come next though. AB de Villiers tried to break Ashwin's rhythm by constantly dancing down the pitch, but was unsuccessful in this endeavour. He also did not read a carrom ball from Ashwin, and was trapped in front. Amla and du Plessis batted with gusto, but it was only a matter of time before one reared off the pitch.