India's vice-captain Rohit Sharma, on Sunday, broke former Sri Lankan captain Sanath Jayasuriya's record for most runs in a calendar year by an opener across formats

India's vice-captain Rohit Sharma, on Sunday, broke former Sri Lankan captain Sanath Jayasuriya's record for most runs in a calendar year by an opener across formats. At the start of the Cuttack ODI, Rohit needed nine runs to go past Jayasuriya’s tally of 2,387 runs in 1997. With his 63, he ended 2019 with 2,442 runs.

Rohit smashed 10 international centuries to go with as many fifties in the year and ended up with an average of 53.08. The Indian opener is also also the leading run-getter ODIs this year with 1,490 runs. Previously, Virender Sehwag smashed 2,355 runs in 2008 and Matthew Hayden amassed 2,349 runs in 2003.

Indian skipper Virat Kohli also capped a memorable year with 85 against West Indies at the Barabati Stadium as India clinched the deciding match of the series by four wickets. Kohli, in fact, finished as 2019’s leading run-scorer with 2,455 runs across formats. 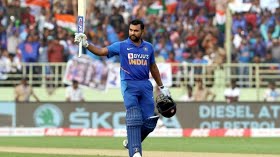 Team Indian ended 2019 on a high with a hard-fought win against the Windies on Sunday. Chasing a tough target of 316, India’s Top 3 again came to the party with Rohit (63 from 63), Lokesh Rahul (77 from 89), and skipper Kohli (85 from 81), all making significant contributions.

The opening pair added 122 in 21.2 overs. However, Shreyas Iyer, Rishabh Pant, and Kedar Jadhav all fell for single-figure scores as India had a middle-order meltdown. The hosts needed a mature 39 not out from Ravindra Jadeja (off 31 balls), and a sizzling cameo from Shardul Thakur -- 17 not out from 6 balls (2x4, 1x6) to see India home in the penultimate over. Keemo Paul as West Indies’ most successful bowler with 3 for 59.

Earlier, West Indies rode on brilliant fifties from Nicholas Pooran (89 from 64), and skipper Kieron Pollard (74 not out from 51) to finish their 50 overs at 315 for 5. Pooran (10x4, 3x6) and Pollard (3x4, 7x6) added 135 for the fifth wicket to lift West Indies to a credible total after the top four all got starts and then gave their wickets away.

Openers Evin Lewis and Shai Hope added 57 for the first wicket before Lewis was dismissed by Jadeja for an uncharacteristically slow 21 from 50 balls. Hope was clean bowled by Mohammed Shami for 42 from 50 balls. Further, Navdeep Saini sent back the dangerous duo of Shimron Hetmyer (37) and Roston Chase (38) to finish as India’s best bowler with 2 for 58.

Thakur also made a significant contribution, dismissing the dangerous Pooran with 13 balls still left, and then coming up with the cameo that sealed the series for Team India.