Last-placed Kings XI Punjab will face sixth-placed Sunrisers Hyderabad in match number 22 of Dubai International Stadium on Thursday. While Punjab have only one win from five games, SRH have registered two wins and three defeats.

KXIP have struggled primarily because of their over-dependence on the formidable opening pair of KL Rahul and Mayank Agarwal. Both have been in wonderful form, and have cracked a century each apart from some other good knocks. At number three, Nicholas Pooran has come to the party with some cracking cameos, but Glenn Maxwell has proved to be a massive disappointment.

While the batting unit has put up some strong performances, the bowling has been heavily dependent on the experienced shoulders of Mohammed Shami. Sheldon Cottrell has been inconsistent while James Neesham has been taken for plenty. Ravi Bishnoi though has been doing a decent job in his debut season. 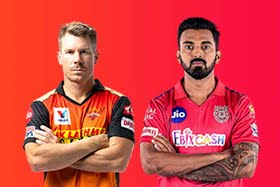 If you look at Sunrisers, they have a strong batting line-up, but things have somehow not come together. David Warner hit a fine half-century in the last game, but the rest of the batting unit completely fell apart. Manish Pandey has played some poor shots to throw his wicket away while Jonny Bairstow and Kane Williamson will be keen to do better.

In the bowling, SRH have been dealt with a massive blow as their senior paceman Bhuvneshwar Kumar has been ruled out of the tournament with a thigh muscle injury. T Natarajan has done a good job, but the other pace bowlers Sandeep Sharma and Siddarth Kaul were taken for plenty. Rashid Khan has done a terrific job, but will need better support to make the bowling attack potent.

Head-to-Head Record: In 14 matches played between the two teams, SRH have a significant 10-4 win-loss record over KXIP.

The pitch at Dubai is good for batting. In the last match, Delhi scored in excess of 190, but batting second RCB only managed 137.

The weather will be hot, with temperature in the mid-30s. Humidity will be 52 per cent.