India lost the Kanpur one-dayer by five runs. It was a game they should have won, if only MS Dhoni had applied some better cricketing logic

India lost the Kanpur one-dayer by five runs. It was a game they should have won, if only MS Dhoni had applied some better cricketing logic. The Indian captain is known for his unconventional approach, but at Kanpur his moves were more bizarre than brilliant. Have a closer look.

Holding back Ashwin after his first over: After South Africa had got off to a confident start, Dhoni brought in Ravichandran Ashwin in the ninth over. He immediately struck, sending back by Quinton de Kock with a perfectly-pitched delivery. What does he do next? Takes Ashwin out if the attack, and allows Hashim Amla and Faf du Plessis to build a solid foundation. He is brought back to bowl only in the 27 over. After a couple of tight overs, he gets injured fielding off his own bowling, and has to leave the field. Ashwin does not bowl in the innings again, and all of India and Dhoni’s plans go awry. 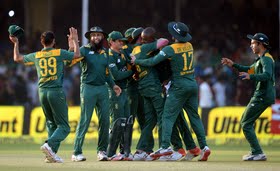 Over-bowling Binny and Raina: when India should have built up the pressure on the South African batsmen by having Amit Mishra and Ashwin bowl in tandem, Dhoni instead preferred to go in with Stuart Binny and Suresh Raina. Although the two did a decent job, they never put the batsmen in any sort of trouble, and allowed them to get set. Even after Binny and Raina had finished their combined quota of 10 overs needed from the fifth bowler, Dhoni persisted with the duo. The Indian captain’s decision of not using out Ashwin earlier, put additional pressure on the Indian bowlers later in the innings, as a set AB de Villiers got stuck into them.

Sending in Rahane at number 3: This was another unnecessary move. Virat Kohli has been doing exceptionally well for India ever since taking over the number three spot. It was unfair on Rahane to have him bat at number three on comeback. He did a decent job, but without doubt Kohli could have scored at a much faster pace. In spite of the partnership between Rahane and Rohit, India still went into the last 10 overs needing 90 runs, which means they got things slightly wrong somewhere.

Promoting himself to number 5: The Indian skipper’s decision to promote himself to number five was also baffling. It had been clear, watching Dhoni’s batting in recent times that he isn’t as aggressive as he used to be in earlier years. Suresh Raina should have been the preferred choice without doubt, but as things turned out, he came in at number six, and was left with too much to do.

Not going for the big hits: Once Dhoni had promoted himself to number five, it was his responsibility to get the big hits, and support Rohit Sharma. But, he failed to do the same. Rohit constantly got the big hits, but the run rate wasn’t in comfortable territory as Dhoni failed to find the boundary. In the end, he left it too late.